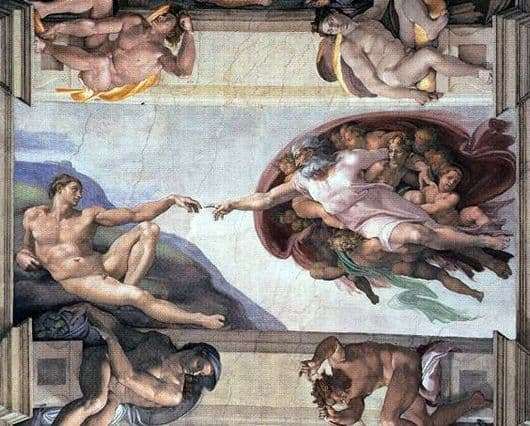 This creation has become a symbol of Western European art. The masterpiece inside the masterpiece amazed the whole world. George Vasari said that the painting by Michelangelo was created as if by God himself, and not by the hand of a mere mortal.

Well-built Adam, devoid of vital energy, remains motionless at the moment when the figure of God surrounded by angels soars in the sky, slowly approaching his body. Adam’s hand rested limply on his knee. The creator draws his hand to breathe life into his creation, and almost touches his fingers to Adam’s finger.

Yes, yes, he does not touch him, but almost touches him, while maintaining a very tiny gap, which gives the picture a fascination and tension. The viewer at the same time covers the visual effect, similar to an electric discharge. It seems to us that another moment, and the divine energy will fill the body of Adam.

The Creation of Adam is part of the murals of the Sistine Chapel. All the work took a little more than two years. It was created from 1508 to 1512 years. At first the artist thought to depict the apostles on the thrones.

Later, in 1523, Michelangelo wrote that in his letter he convinced Julius II of the insolvency of such a plan, as a result of which he received complete freedom of fantasy. On the side walls, the viewer can see the era of the Law and the era of Grace, on the ceiling the painting is devoted to the beginning of human history, described in the Book of Genesis.

1. Creation of the world

2. The creation of Adam and Eve, the temptation, and then the expulsion from paradise

3. The story of Noah

This painting can be interpreted in different ways. Since it is written in the papal chapel, its meaning should be orthodox, but everything else embodies the idea of ​​a renaissance.