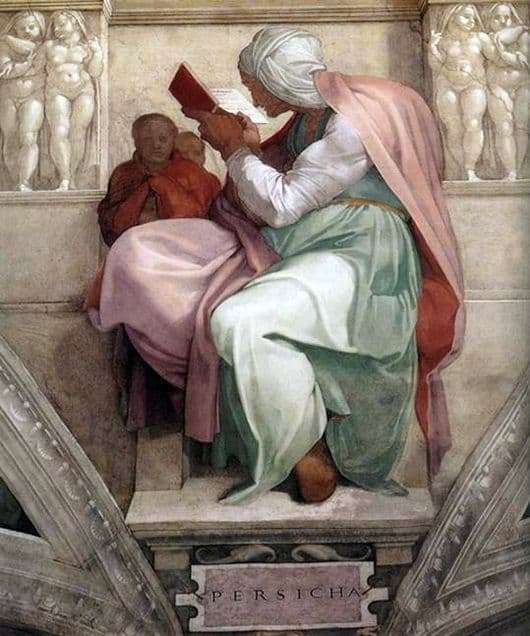 Unlike the Libyan Sibyl, its “ally” according to the predictions of the Persian Sibyl lived in the East, which can already be understood from its name. She bore the name of Sambet and in another way was also called the Babylonian soothsayer.

Mention of it belong to the 13th century BC. e., to the same period, namely by 1248 BC. e., belong to the prophecies of the famous Sibyl, which she scooped in her books, reaching up to 24 pieces. It is believed that in them there are prophecies concerning the life and acts of Jesus Christ, as well as Alexander the Great and other legendary personalities. They expressed themselves in the form of poems with a double meaning, which cannot be interpreted unambiguously.

According to descriptions of contemporaries, the Persian Sibyl wore gold clothes and had a youthful appearance. On the fresco of the Sistine Chapel performed by Michelangelo Buanarotti Sambet appears at a rather old age. The woman sits, almost completely turned away from the viewer, bringing her face close to the unchanged book.

Perhaps it was at this moment that the Persian Sibyl reads its next prophecy, all of which were imbued with secret and centuries-old oriental wisdom. What is hidden in them, what does it promise to the listener – grief and sadness, and maybe joy and happiness? Old Sambet has become, her eyes are not as good as in her youth, but her mind is still sharp and clear.

As always in the work of Michelangelo, in the image of the Sibyl prevail bright and saturated colors, emphasizing the wealth, good quality and excellent quality of the robes of the Persian soothsayer.

It still feels the inner strength, inherent, however, to all five Sibyls, and this is undoubtedly the merit of the great painter Buanarotti, who managed with unsurpassed accuracy to convey the characters of prophetess using not words but brushes and paints.