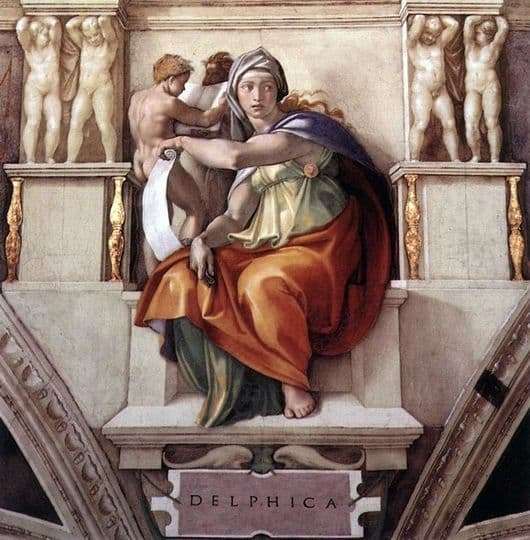 Michelangelo not only in life, but also painting, argued as a sculptor, which is why the artist painted a fresco of the ceiling of the Sistine Chapel with a large number of sculptural images. Such is the Delphic Sibyl. Her passionate torso movement and gazing into the distance fascinates the viewer. And the hand lying limply on the knee slightly opposes this image.

As it is known since ancient times, the Sibyls were prophetess of divine origin, receiving inspiration from Apollo, the sun god. The Delphic Sibyl was the most famous. She predicted the fate of Delphi, in the temple of Apollo. In Christian and Jewish poetry, the prophecies of Sibyl are closely related to the Bible, therefore their images were on the ceiling of the Sistine Chapel.

Delphic Sibyl Michelangelo’s fresco is part of the Sistine Chapel mural. The artist worked on this masterpiece for 4 years, which was a physical and spiritual feat for Michelangelo. All these years in an uncomfortable position, reclining on the stage, he worked alone, only occasionally allowing assistants to mix and grind colors.

The artist wrote a poetic message to his friend Giovanni, in which he complained of his physical torment, which he experienced for 4 years. In addition to these difficulties, the great Michelangelo constantly urged Julius II and often bothered him with his sudden visits to the Sistine Chapel. He deduced the artist so much that sometimes he pretended not to notice the Pope, and he scared him, dropping a couple of boards down. Delphic prophetess first got her name Sibyl.

Judging by ancient traditions, according to ancient philosophers, Homer extracted wise thoughts from the predictions of the Delphic Sibyl. The Delphic Sibyl is a young and beautiful diviner, with eyes staring into the distance. This girl is so strong in spirit that she can stand the problems of the whole world on her fragile shoulders.