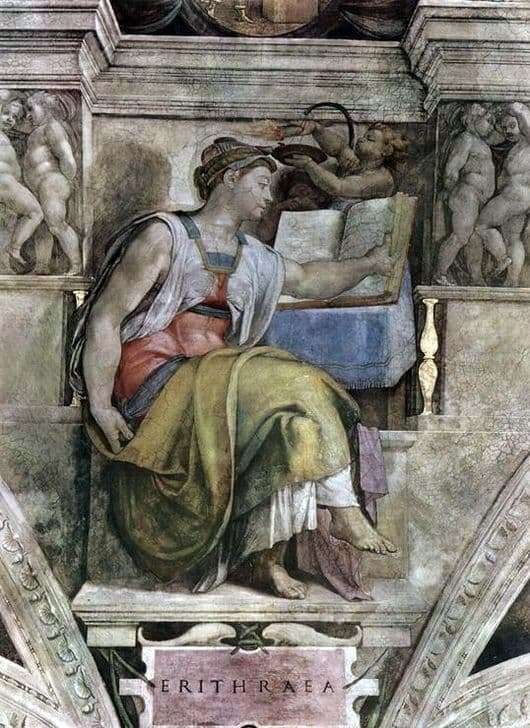 The fifth sibyl is Eritrea. In another it was called Gerophila. Her parents were Lamy and Apollo. She is mentioned more than once in the books of Moses. This Sibyl predicted to the Greeks the Trojan War that the city of Troy would be captured, the fate of Aeneas, the well-known founder of Rome, the future of his descendants and the coming of Christ.

It is called Svila Eritrea, because it was born in the village of Eritron. She had many names, everyone called her differently: Sicilian, Sardinian, Gergifa, Rhodes, Libyan, Levkadskaya and even Samia. It existed 483 years before they took Troy. She lived more than 1000 years.

In his work, Michelangelo was able to accurately convey the image of this blooming and balanced person. He relied on all known facts about Sibyl. For example, it was known that she wrote various books and prophecies about God, the Son of God, the Savior, the movement of human members.

She also composed many prophetic hymns, poems and invented a triangular shaped instrument similar to a harp. No wonder that Michelangelo depicted the Eritrean Sibyl in his fresco, turning over the pages of an ancient book, in such a way that anyone could notice its beauty, charming look and strength of its physique.

Historian Giorgio Vasari described it with the following words: “The Sibyl keeps his book away from himself and, putting his foot on the leg, is going to turn over one more page, while she pondering with concentration on what to write next, at that moment standing behind her she makes a fire to light a lamp. The figure of this beauty is extraordinary both in facial expressions and in clothes, and in her hairstyle; so are her bare arms. “