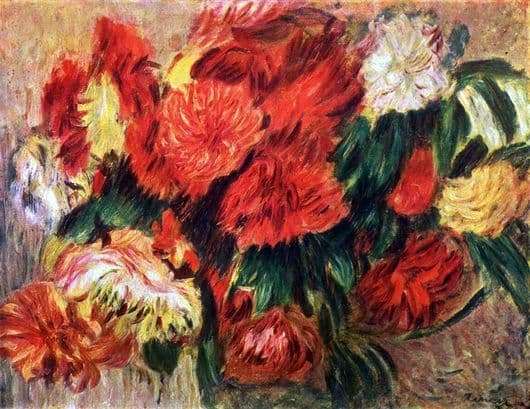 Among the works of Pierre-Auguste Renoir, you can count a few dozen still-life flowers, depending on the paintings of the French artist, it is possible to trace how the French bouquet has changed. One of these still lifes with the image of flowers was painted in 1900, the painting “Chrysanthemums”.

The picture is made in colorful colors and looks very bright. Judging by the paintings of Renoir, chrysanthemums were one of his favorite flowers, and therefore he tried to apply them from a particularly attractive side.

Many critics argue that Renoir did not invest deep meaning in his “flower” creations, as Monet did, he was more likely guided by market interest, as still lifes depicting flowers were selling well, and the bright colors attracted buyers. The French painter himself admitted in his time that still-lifes with flowers were easy to paint and sell well, but this does not mean that painting was only work for him.

Drawing pictures with flowers was rather an entertainment, a rest for Renoir, so he harmoniously combined the pleasant with the useful. But, despite the fact that the paintings were written in a hurry, and the author did not regret the paint, one cannot say the low quality of the works of the French impressionist. All his canvases, including “Chrysanthemums”, are flawless, which only testifies to the genius of the artist. Works that famous artists wrote with great difficulty, experiencing great creative torment in search of insight, Renoir were given without much difficulty.

French talent believed that the picture should not be boring, it should radiate joy, be bright and attractive, this signature Renoir signature can not be overlooked in his works. The painting “Chrysanthemums” is just another confirmation of the refined style and bright taste of the impressionist artist.