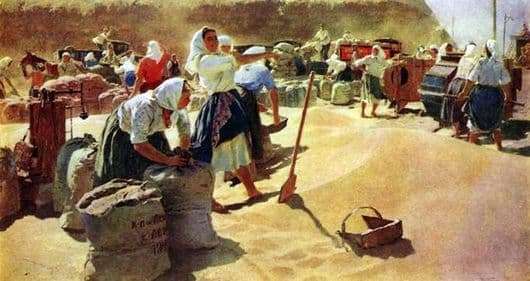 The painting “Bread” is one of the most famous works of the well-known artist Tatyana Nilovna Yablonskaya, written by her in 1949.

The picture shows the time that had already arrived a few years after the end of the war. But there is no grief or regret in her, but only joy and happy faces. The landscape of the picture is almost invisible – it is represented by a dark forest and a small piece of the sky, and the important thing on it is completely different. The main characters of the picture are the collective farmers during the time of the strada, who very hardworkingly do their work under the gentle summer sun. And, of course, the bread – all around are covered with its golden warm grains!

In the foreground, two women collective farmers are gathering placer bread grains. One of them, dressed in a green skirt, a polka dot shirt and a white scarf, hurries to tie up an already filled bag, while the second rolls up the sleeves of a white shirt so as not to interfere with work. There is a smile on her face, like that, for sure, we could see on the faces of other workers. They have fun, they are happy, because such a good crop was born!

A little further we see a lot of the same women filling the bags, and behind them – the men who put these bags into the bodies of the cars. People have fun talking, joking, laughing! All are engaged in a common cause – harvesting, and it is clear that they are glad of work and for anyone it is not a burden, but, on the contrary, everyone is trying to do his best.

Tatyana Yablonskaya wanted to depict life in her picture, which really causes delight. This delight comes from the realism of the picture, from the cohesion of the team, from the vigor, beauty and health of each character. “Bread” sounds like an anthem to national labor, inspires and fully conveys the atmosphere that reigned then. No wonder she brought fame to her author throughout the country and the Stalin Prize of the second degree.