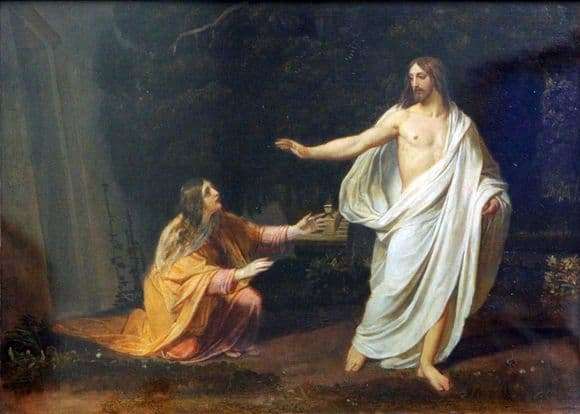 In 1835, the Russian artist A. A. Ivanov was in Italy, where he was sent at the expense of the artistic community. This organization was waiting for the grand canvass promised from Ivanov. But the artist by that time was not yet ripe for his writing. Therefore, having become closely acquainted with the works of famous Italian painters, Ivanov began to work on the “rehearsal” canvas before creating the “Appearance of Christ to the people.” He painted two figures on canvas: Jesus and Mary Magdalene.

The plot chose common at that time among European masters. About him is told in the Gospel of John. First I saw the resurrected Master Magdalen and rushed toward him. But Christ stops her with words and a gesture: “Do not touch – I have not ascended to the Father…”. This very moment of the 20th chapter of the scripture is illustrated by Ivanov.

The composition of the picture differs in spiritualized simplicity, the figures of the characters are sculptural, canonically beautiful, plastic. Depicted are Christ and Magdalen turned to the front, for the convenience of contemplating facial expressions and transmitting their spiritual experiences.

The figure of Christ is written in perfect proportions, the folds of white robe are elegantly crafted. Mary Magdalene has a fiery red dress. By such opposition, the artist expressed the difference of the spheres in which the human being and the divine reside. The white fabric on the body of Jesus glows, shimmers like pearls and nacre, bluish-golden, it reminds of heavenly transcendental spheres.

Magdalene is shown on the ground with one foot on her knee, extending her hand to her beloved Savior. Christ restrains the strong spiritual impulse of the female student with a calm but stern gesture. Ivanov was able to convey the love of Jesus and the mixture of Maria’s spiritual experiences when meeting with him: the pain of his death, the delight of return and the hope of early happiness.

For the canvas painter gave the title of academician.