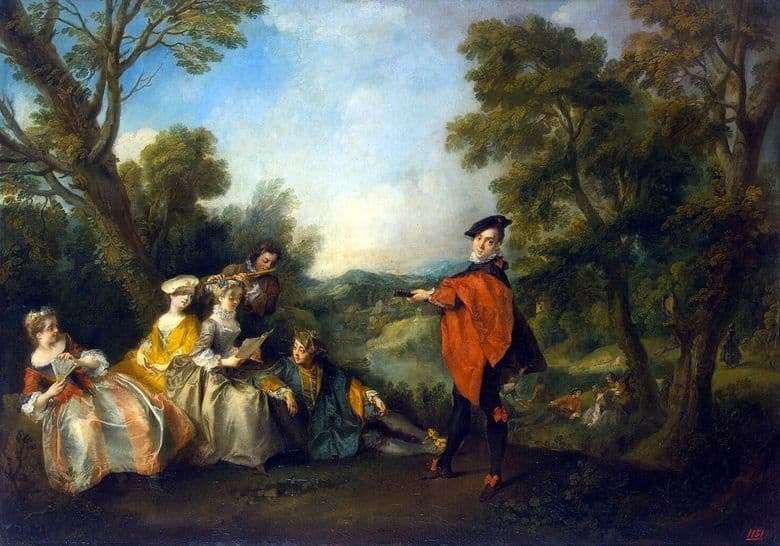 This work of art was created by a famous French painter named Nicolas Lancre. As it can be logically understood from the actions taking place on the picture itself, it has the name “Concert in the park”. As for the size of the canvas, it reaches more than 75 centimeters in width and almost 110 centimeters in height. Art critics refer the drawing to the Rococo period, but you can also see some notes of neoclassicism in it.

At first glance it seems that the name was invented absolutely messy and ridiculous, but, turning to the dictionary, we see that at that time absolutely any public performance of theatrical, vocal or instrumental character was considered a concert. Absolutely no matter how many speakers were envisaged in the concert.

In this picture, we just see one speaker. He is dressed quite elegantly: he is wearing a red and black cape, black breeches and socks. The shoes and the lower part of the clothes are decorated with large curvy bows to match the cape. On the head of the artist is a traditional French beret. Even now, as you know, it is carried by creative personalities, most often artists or poets.

Our artist entertains the aristocratic audience. This can be judged by the appearance of the boys and girls, who settled down to relax under the old razlohim tree. Girls are dressed in lush dresses. Guys also have outfits similar to those that were named in the description of the speaker. These are young people who are entertained by intellectual conversations and similar kind of fun.

When creating this picture, the artist used soft and unsaturated tones. Judging by the grayish tinge of the sky and the surrounding nature of young people, it can be concluded that it is already evening on the street. They may have spent the whole day like this, or maybe they perform in turns, entertaining each other with singing and music.