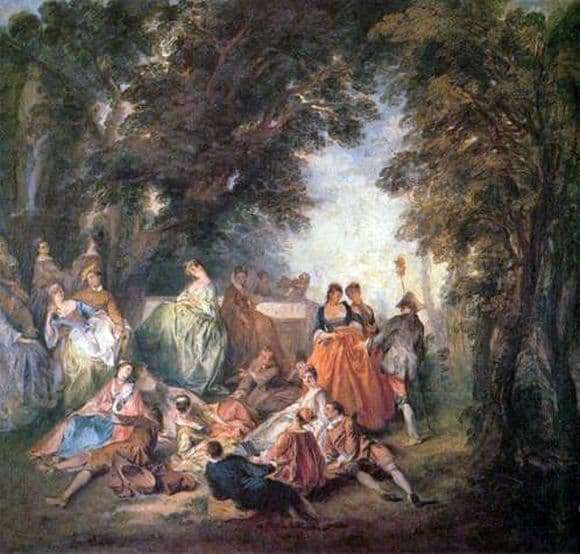 Antoine Vatto – is one of the famous artists, a bright representative of the Rococo style. This is a French artist, so the basics of his work simply can not be considered without affecting the French culture for the period from the end of the sixteenth to the beginning of the seventeenth century. The work of Watteau inscribed in almost everything, from painting the same era and ending with literature or music.

In order for a person to enjoy the art of this artist and a true master of artistic creativity, it is necessary not only to look at his paintings or read useful information about them, but also to be fairly erudite. We are talking about erudition and awareness of any kind of art of the time in which this artistic figure lived and painted.

A person who wants to taste and imbued with all the magic and beauty of the painting “Society in the Park” should have at least a superficial idea of the nature of the works of Corneille, Fragonard, Couperin. Roughly speaking, you need to feel the spirit of the era of Louis XIV, and then the seemingly ordinary paintings of Watteau will turn into true stories full of feelings, emotions and experiences.

With the help of his paintings, Watteau was able to create a real separate genre, which traditionally became known as “gallant festivities”. And one of the most outstanding works, which is a prominent representative of the genre, is the Society in the Park. Connoisseurs and experts who are sensitive to such work, I can appreciate her worth. As Oswald Spengler noted, Vatto belongs to the realm of Bach and Couperin. Therefore, as already mentioned, for an accurate understanding of the painting and its hidden meanings, it is necessary to explore the world and the era in which the artist lived.

But even without an understanding of that time, one can see that Watteau attaches importance to flowers, color, characters and nature.