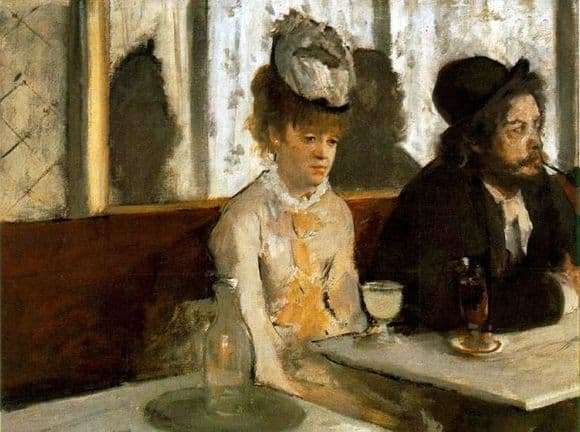 At first it was called simply “People in a cafe”. We see a pretty drunk woman and definitely a sober man who settled down at a table. This is Degas’s friend and popular actress. She was always elegant. But before us appears absolutely simple woman.

Directly in front of her glass, which is filled with absinthe. It is noticeable that they have already been drunk a lot. The woman stretched her legs forward a bit, she let down her shoulders helplessly. She is indifferent to everything. The eyes of the man are completely bloodshot.

Directly in front of him is a glass in which a miracle cure that helps from a hangover is poured – mazagran. Everything happens in the morning. Nearby we see a carafe in which water is poured. Absinthe was diluted with it. The viewer sees the newspaper. They are specially offered for those who come to the cafe. There is a mirror behind the sitting pair. Degas specially circumcised him. The thing is that he was characterized by a certain photographic manner. You can see a window in it. Through it, the light of an incipient morning penetrates the room.

If a man looks to the side, the woman’s gaze is strictly in front of him. She absolutely does not care. Degas deliberately displaced the figures, giving the picture some transience. The artist wanted to vividly demonstrate that the man in his modern Paris is becoming increasingly isolated. The composition is completely unpredictable and even slightly hooligan. Many painters devoted their pictures to this theme, but Degas got something special.

This is a real picture-mystery, which is not so characteristic of Degas. It seems that absinthe simply distorted the whole reality. He changed it beyond recognition. It is no coincidence that the author decided to rename the picture, naming it “Absinthe”.