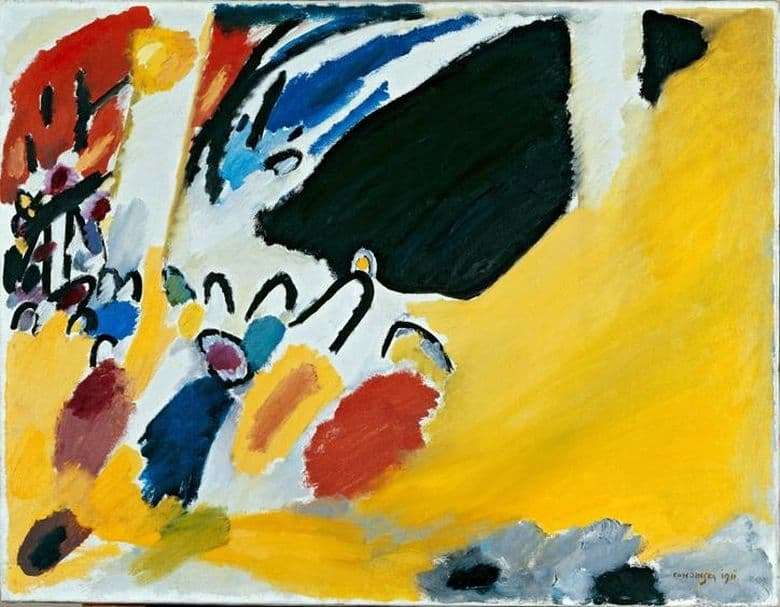 Vasily was not only an outstanding artist but also a theoretician. He believed that art should throw off the shackles that the physical form of objects and phenomena imposes, and convey the deepest essence of ideas to the viewer. According to the classification of the picture divided into a composition, improvisation and Impressions.

The latter refers to this work and is the image of inner experiences of the author from certain things or events. This canvas reflects emotions experienced from the magnificent concert of the Austrian-American composer Arnold Schoenberg, with whom they later became friends on the basis of a common understanding of the basics of musical and pictorial images.

When viewing such expressionist abstractions, an ordinary person should turn off the rational and feel it with his soul, with a special vision, trying to comprehend all the nuances with no reason. However, with regard to this creation of the master, one can understand quite a lot about what is written, after looking more closely. Because the big black something is very similar to the piano in its shape.

Clinging to this association, it becomes logical to assume that the public is in the lower left corner, and in the upper, respectively, the rest of the orchestra, distinguished by coal lines similar to bows. Also, the movement energy is visible to the naked eye – smears, large and small spots, which are directed diagonally into the right corner.

Of particular importance is color. Yellow is very arrogant and dynamic, it is disturbing, it strongly touches the beholder, blue, darkening, causes growing melancholy, red gives power and aggressive force, black symbolizes a faded abyss and something absolutely weak-willed.