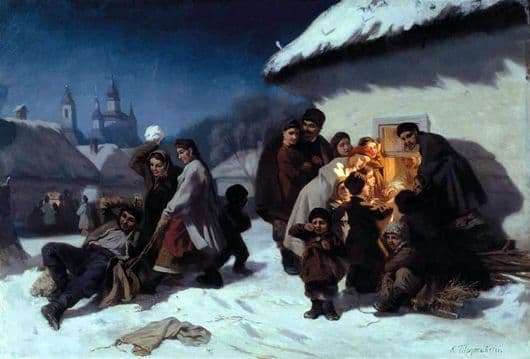 The artist Trutovsky has one characteristic difference among many artists; every picture of him was carefully prepared and executed. Is no exception, and “Carols in the Ukraine”.

Before the next picture of the artist was declared complete, she experienced a huge number of sketches in pencil, watercolor and drawing all the details. This fertility is visible in this picture. In spite of the fact that the master especially liked to depict various everyday scenes of the Ukrainian inhabitants, he also liked to portray to some degree different landowners, namely their morals and some scenes with them.

It is worth noting that in all such pictures, one can notice some kind of sharpness in his astounding observation, wit and a subtle sense of tact, if necessary, make a “shot” with the help of paints in those places where it is most relevant. Unfortunately, looking at this work, you can see a fairly common mistake, which is repeated in the author from picture to picture.

Firstly, it is clear that the artist still does not have a sufficiently high level of artistic training.

Secondly, it is worth adding that his hasty works are visible, and hasty strokes are visible, which unfortunately are sometimes not able to reliably and as accurately as possible convey an idea that was skillfully conceived but not so well executed.

Despite all these negative aspects, this picture is made at a fairly decent level, some images are made so naturally that it doesn’t allow us to say about any mistakes or nuances made during the work. The construction of the plot itself is also quite interesting and colorful. Especially vividly looks snow and glare.