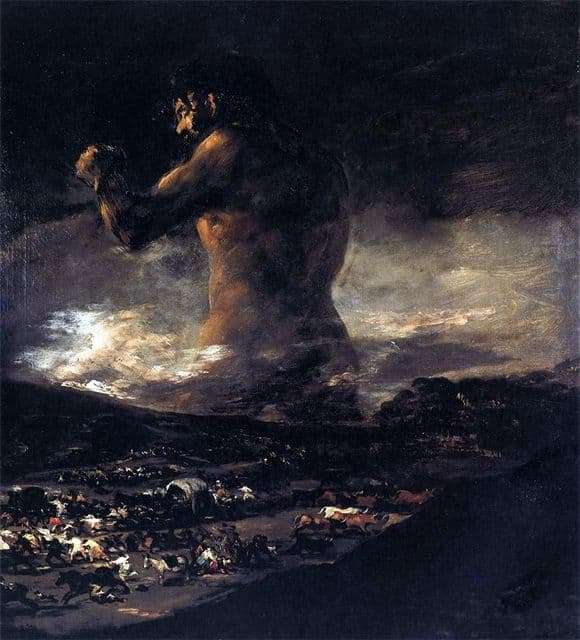 The painting by Francisco de Goya “Colossus” was painted in the period from 1810 to 1825.

A talented artist could always convey through his canvases all the feelings that overwhelm him, and even centuries later admirers of his art are captured by passion, irrepressible joy, moments of admiration and affection, but more often than not, viewers of pictures are inhibited by panic. Yes, Goya is a master of transmitting terrible moments that not all fantasy is capable of.

The painting “Colossus” also gives birth to horror and panic from the inevitability of enormous power, unknown power, from the helplessness of a person in front of the mighty Colossus.

A huge creature, aggressively clenched fists, an unkind gaze from under shaggy eyebrows – what does it carry – is it protection from harm, or will it cause agonizing horror?

In the foreground are people and animals who are trying to save themselves, to run away from a powerful and unkind force, but it is clear to the viewer that no escape will be possible. From this it becomes unbearable.

The same feelings arose among all the people and Francisco Goya himself after the war with France began in 1808. The French burned down the cities, carrying death, grief, misfortune and relentless horror.

After the painter’s hometown of Zaragoza was burned, Goya experienced an unprecedented shock. It was the horrors of war, ruthlessness, inhumanity that the artist conveyed in the form of a terrible, enormous figure of the Colossus.

True, some art critics believe that the image of the Colossus personified the strength of the people, which rose against the French troops. Clenched fists, tense body – everything speaks about the readiness to fight and battle. The look of the giant is directed aside, it is stated that with such hatred he looks at Napoleon.

Whose version is the truth, it is not known, it is clear only that it was the incinerating fear of war that the artist tried to convey.