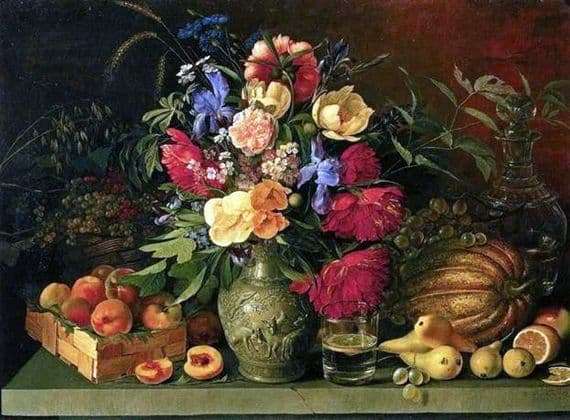 The central place of the picture, despite the abundance of various details, is occupied by a vase with the image of animals walking in the wild nature. Apparently, it is made of porcelain, although it may be that it is made of metal, since its color has a dark green tint. In the vase, the artist placed several flowers, among which red buds stand out peonies. Three of them are lowered, as if the days of their beauty had faded. Delightfully look and two blue iris, scattered on the sides of their petals.

The remaining flowers are predominantly yellow shades are either in pairs or alone. The composition is diluted with green leaves and in some places sticking up the ears of wheat or some kind of grass.

To the right of the vase is a half full (or empty) glass tumbler. One of the peonies drops its petals into it, as if desiring to drink nutrient moisture. If you continue to lead your eyes further, your eyes will stumble upon a cluster of fruits. The main place among them is occupied by a large pumpkin, part of which is “hidden” behind a bouquet of flowers. From above, the artist placed a bunch of grapes on it. But the five berries seemed to have fallen off and are now hanging down from the edge of the table, covering a part of ripe pears. In the lower corner of the picture there is an incised orange, behind which a red apple is “modestly” hidden. The upper part of the image is occupied by a carafe of water, in some places poorly distinguishable on a brown background.

On the left side of the picture are ripe peaches, neatly laid on a leafy bedding in a wicker box. Next to her, the artist placed the cut fruit, as if wishing to demonstrate that it is really ripe and ready to eat. Behind them is a large basket, filled to the top with bunches of grapes.

The artist chose colors mostly saturated, really summer. Only the background is dark, but at the same time, it performs its main function: it allows you to truly enjoy the beauty of natural fruits.