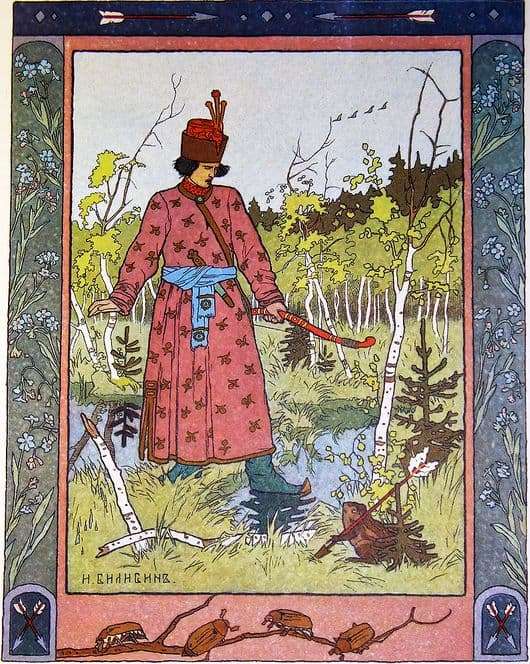 The great Russian artist Ivan Bilibin liked to create illustrations for fairy tales, this particular trend in art was especially good for him. Since 1899, he created entire cycles for the publication of fairy tales, while working in different styles. For each story, he picked up his approach, made his own flavor. He worked in the technique of ink, backlit with watercolor, used Old Russian plots. “Illustration to the fairy tale Tsarevna Frog” is considered to be one of the most famous creations of the Russian artist’s pen. A lot of illustrations were created for this tale of illustrations. Consider, for example, the most vivid plot: The meeting between Ivan Tsarevich and the Frog Princess.

The whole scene is depicted on the background of greenery, amazing combinations of different colors and shades create a pleasant sincere color to what is happening. Ivan is the Russian soul, dressed in a national caftan, hat and green boots. A frog with an arrow in its paw looks at its savior with a heartfelt glance in anticipation. The plot is kind, foreshadowing a happy ending.

Bilibin knew how the work would end, so he deliberately depicted happiness and success, as if preparing the listener for a pleasant, long-awaited ending. As for the general description of all the plots for the fairy tale Tsarevna Frog, here the costumes of all the characters, exactly corresponding to that time, are clearly traced. Facial expressions: funny, sad, surprised, etc. it is so clearly seen that one can guess from them the continuation of the whole story of a fairy tale. The author is so delicate and accurately penetrated to this fairy tale, that he told the reader all the features of that time, the way of life of people, life, and most importantly human relations. Good and evil are shown as they really are, there is nothing fictitious and fictional.