Home ⇒ 🎨Bilibin Ivan ⇒ Illustration for the tale of Ivan the Tsarevich. The Firebird and the Gray Wolf by Ivan Bilibin 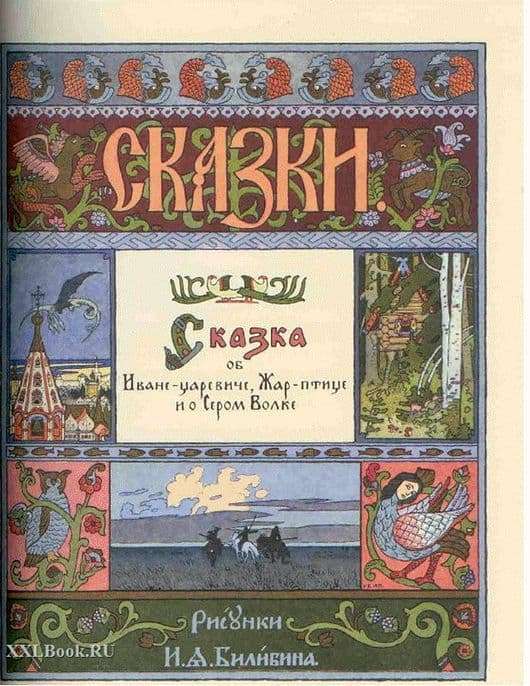 Ivan Bilibin is an artist who introduced irreplaceable development to Russian folk tales with his illustrations. For four years he creatively designed seven fairy tales, but this did not stop.

The artist grew up in the Petersburg environment and was far from Russian national folklore and the past. But after visiting the exhibition of artists in 1899, his outlook changed.

The painting “Warriors” Vasnetsov struck Bilibin. He decided to seize the old Russian and folklore. For this, he moved to a village in the Tver province. There he broadens the horizon of knowledge, wandering through dense Russian forests, visiting cottages and listening to fairy tales. All this formed his vision of how to make books not only interesting with his stories, but also with illustrations to them. Imagination painted pictorial paintings. He takes up work. In the same year there are collections of Afanasiev’s fairy tales fully illustrated by Bilibin.

In the tale of Ivan the Tsarevich, the Firebird and the Gray Wolf, we can see how picturesquely the artist painted all the characters, the Russian rich nature and its inhabitants. Bilibin is the first artist who made the collection fully illustrated. This can be seen through the beautiful patterns on the pages, even the text was written in such a way that it seemed like an old manuscript.

The artist knew the history of different nations, as well as what their fonts looked like. Bilibin fully illustrated the collections of fairy tales from the cover to the last pages with his own ornamental ornaments and intricate drawings that were not repeated anywhere else. The name of the tale is Slavic script. On each page you can see patterns, as if on the old Russian houses carved platbands.

Each tale has the same cover artwork, but with the main character from this tale. The book about Ivan Tsarevich depicts Russian warriors standing in the middle of their native expanses, the Firebird, a hut on chicken legs and other characters in the tale.

Of course, Bilibin made an invaluable contribution not only to painting, but also to the development of Russian fairy tales and folklore.