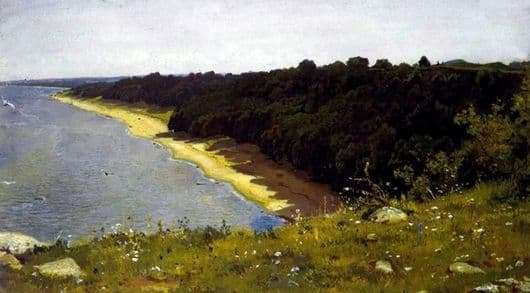 Ivan Ivanovich Shishkin wrote his next masterpiece, which has the name “By the Sea”. In this picture, he maximally reveals all the beauty of the forest, which lies on the expanses of the earth and borders on the coastline of a sandy beach, directly in front of the sea. The panorama itself shows all this beauty from the height of the hill, which is only a little inscribed by the artist, to the foreground of the canvas.

In this picture, as in many similar works, the artist sincerely admires the immense view that appears before his eyes, precisely because of this, he most authentically transfers everything he sees to the canvas. As far as we can see, the entire left part of the picture is completely provided by the master, under the exciting sea, which so elegantly splashes against the shore. The coast, in turn, moves away, away from the horizon.

The artist tries to maximally combine in one picture, the imperturbable beauty of the forest, and the unshakable power of the sea element. It should be noted that this work was done by an oil master on cardboard. It is just amazing how subtle nature is conveyed, if you look closely, you can see how a cloud rose over the forest, which covered half of the forest. This is evident due to the shadow, which differs markedly from the general background.

The difference between the sea and the forest is perfectly underlined by two colors that are so different in tone, in the case of the forest, the color is warm green, while the sea is cold blue. In this case, something like a dividing strip is a yellow, sandy beach. In general, the master managed to convey not only the mood of the picture, but also to embody, in the canvas, his own emotional state, while writing the picture. The pale blue sky especially emphasizes the whole plot and general idea.