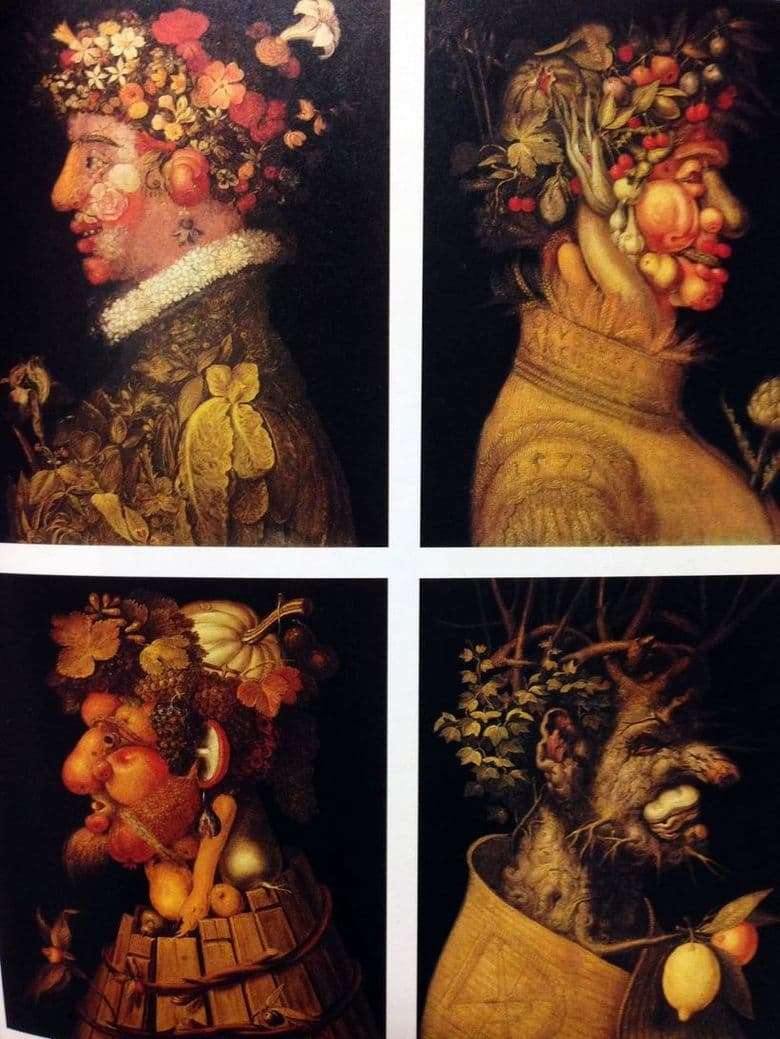 “The Seasons” – a cycle of four works of the sixteenth century Italian painter Giuseppe Archimboldo, who created them by order of the emperor. In these paintings, the artist managed to depict each of the four separate seasons in the form of a human profile composed of elements of nature characteristic of these periods. The peculiarities of the arrangement of the paintings reflect the ideas about the annual cycle that prevailed in the late Middle Ages, which at that time was usually divided into two half-years (winter-spring and summer-autumn); also in Archimboldo, the adjacent periods of one half year are facing each other, as if talking to each other and forming a single composition.

The Seasons is characterized by a bizarre combination of a multitude of objects of the surrounding nature, reflecting the spirit of its time and its perception in allegorical form. So, Winter is depicted as a cracked old stump, looking like a crooked, wrinkled old man; the nose of this old man, shown in the form of grassy growths, is cracked and flaky, a crooked mouth without teeth is formed by a mushroom, an ear is a broken knot, and the chin is covered with warty bushes. On the other hand, Spring is looking at him, visibly contrasting with the first image: this is a young girl, all the traits of which are created from herbs and fragrant flowers.

“Summer” is no longer a girl, but a young woman; the picture vividly conveys the pomp and ripeness, the wealth of fruits, berries and vegetables. “Autumn” is shown in the form of a riot of grapes, pomegranates and many other fruits that form the profile of a cheerful and strong man. Creativity Giuseppe Archimboldo, One of the first Christian-canonical frames of perception of painting that went beyond the limits of the Medieval Ages and for the first time reflected the combination of the beautiful and the ugly within the same composition, was an unusual phenomenon for his contemporaries. Later researchers note that the work of this artist, including The Seasons, indicates the beginning of the formation of new trends opening the Renaissance in European art.