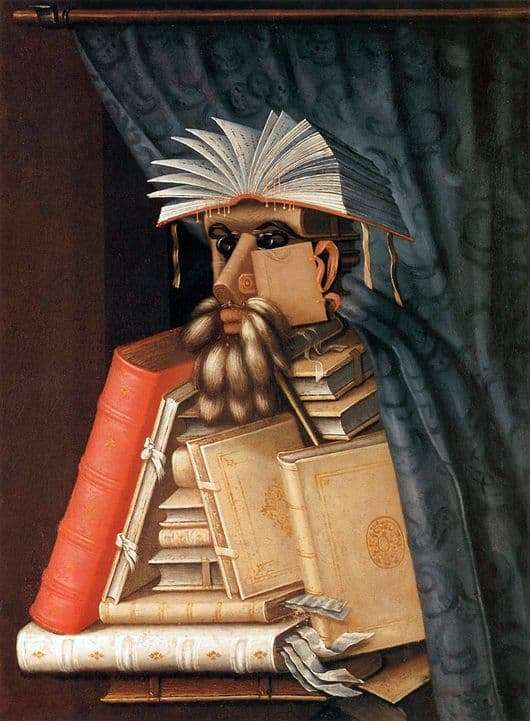 Giuseppe Archimboldo – an artist who lived in Italy in the 16th century, a painter at the court of the Habsburgs. He was a mysterious and original artist of the time, thanks to which he became famous. Neither the general public nor the experts can still fully solve the mystery of his painting.

Today, his paintings are impressive for their unique artistic design, and bold avant-garde incarnation. Up to now, 14 of his paintings have come down. Archimboldo is a brilliant exponent of nature, he very skillfully and truthfully conveyed on his canvases her colors, dying and resurgent splendor.

One of his paintings, The Librarian, was painted by him in 1565. Looking at this picture, it seems that the author has depicted a real bookworm.

This three-dimensional composition embodies the image of a stereotypical library employee who has been worked out over many years.

This is such a man with a beard of not understandable age, he is covered with books.

The librarian seems to be coming out from behind a closed dark curtain to bring several books from the archive to the reader. He has been working in the library for many years, completely immersed in his activities. This bookworm knows how to help readers with choosing the right book, and where what is on which shelf.

In his hands and chest he holds books of different colors and sizes, they are also depicted in the form of hands, heads and bodies. To some, the librarian depicted may seem like a boring, middle-aged worker who jealously guards book wealth.

This image created by the author with the help of a visual pun in the form of a symbolic figure, which the artist managed to create. These transformations in the 20th century were as a source for inspiration and imitation of the well-known surrealist painter Salvador Dali.