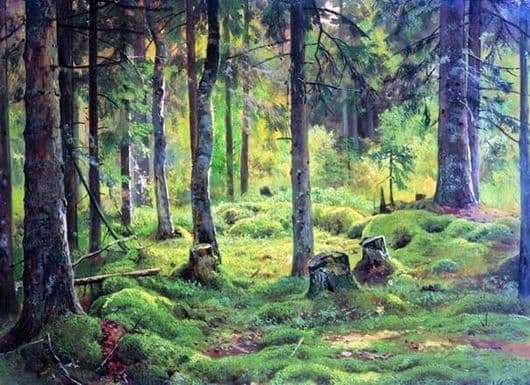 Among the Russian landscape painters there is not one whose skill, ability to capture nature on canvas was equal to the talent of Ivan Shishkin. His ability to subtly reproduce, to the smallest detail, any bush or tree truly surprises.

They ate, birches, oaks – all of them were transferred to the canvas with photographic accuracy without unnecessary embellishment or understatement. Leaves, branches, bark – it all reproduced very accurately. And even in such trifles as the soil on which trees grow, grass, stones, Shishkin was always accurate.

It will take a lot of time to list all the canvases of the artist, because his creative heritage is not limited to the famous “Morning in a Pine Forest”.

The lion’s share of his work is occupied by “random” sketches, capturing nature in all its manifestations. The artist began to create them while still a student of the Academy of Arts, in order to subsequently turn to the genre of etude throughout his life, improving himself. So, using the example of later studies, the artist seeks to more accurately convey the nuances of nature, the expression of images using the principles of tonal painting.

The etude Valernik (1893) among others testified the search for Shishkin. In this picture, pay attention to two features. First of all, it is an unusually light tone of the picture, indicating that the artist chose the time of dawn as the image. A similar mood is present in the already mentioned “Morning…”, however, even there the light colors still do not sound as shrill as in Valens.

In addition, the choice of the image object – a dead tree, that is, trees that, broken by a storm or for another reason, fell to the ground, is also interesting. This only proves Shishkin’s interest in any, even microscopic and imperceptible changes in nature, which, in his opinion, are quite worthy of the image.