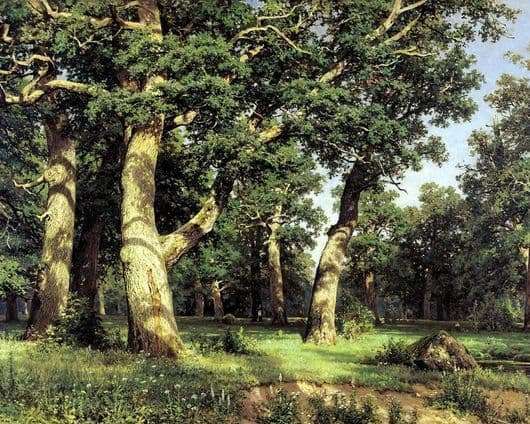 On this masterpiece canvas depicted, as you understand from the name – oak grove. But to say “that the picture has an oak grove painted on an ordinary sunny day,” it means not saying anything.

Just a monumental canvas, one of the greatest artists of Ivan Ivanovich Shishkin. The time between the idea of ​​this painting and its execution took about 30 years, it seems that it took the artist exactly so much time to reach the peak of mastery that we actually see in his beautiful work.

The whole picture is literally soaked with the light of the sun’s rays and their warmth, in every millimeter of this canvas one can see the uniquely done titanic work, after which it becomes clear that for such work even one century is not enough. Such careful details give us a sense of naturalness and loss of the line between reality and drawing.

Sometimes it just seems that you can enter this forest and even feel the fresh smell of it. The rays of sunlight on the grass, traced with high precision, gentle and warm rays of light as if stroking the centuries-old mighty trunks of oaks and treetops. Even considering that for many years and in some places the bark began to peel off, their high tops are still green and thick.

When observing this picture, thoughts that these oaks stood several centuries before you slip into your head, then you will not become, and they will still be standing there for several hundred more years. Almost all art critics call this Shishkin canvas, the most ingenious Shishkin canvas, which you can live and enjoy all the feelings that I wrote about in this review.

At the moment the picture is exhibited in the Kiev Museum of Russian Art, and anyone can do it, again and again, as if being directly in the very center of this oak grove.