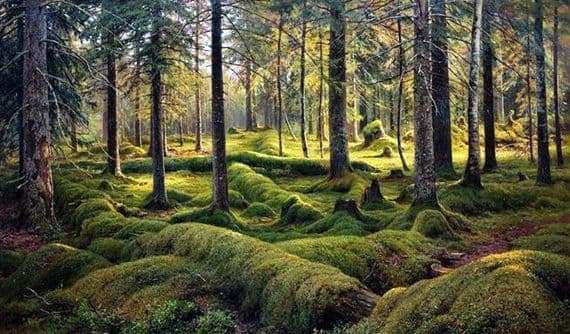 The canvas was created in 1893 in oil on canvas.

Shishkin is one of the greatest Russian artists. His work is known all over the world. Shishkin painted dozens of canvases depicting rich Russian nature. They are all filled with the love of the author.

The painting “Forest Cemetery” depicts an old fallen tree. High old age-old pines stand on the remains of their ancestors. They were defeated and surrendered under the influence of time and natural elements. Once they have experienced many events, proudly standing up one century after another. Now, they are buried here, giving a general view of longing, making you think about the frailty of everything in this world. How masterfully Shishkin owned a brush. Mosses and greens have a striking combination of yellow-green shades. The background is filled with the sun, where fallen trees also lie. Somewhere in the distance you can see the sky.

What caused their massive death? Perhaps a strong storm, or the inexorable action of temporary years. But the tragedy of the landscape is that a dense layer of moss, rotten trunks and stumps do not allow a new life to develop. On the trunks of the pines, you can see the corroded bark, and white bloom, which foreshadow the imminent demise of still strong trees. The absence of needles and thin dry branches only confirm speculation about the approaching death.

The picture at the same time delights and makes sad. The game is amazing colors, tricks used for the detailed image of the texture of moss. Shishkin used the method of fine-applied paint, which gives the canvas an unsurpassed brilliance and structure.

Thanks to the paintings of the artist, we can be proud of the luxury and power of Russia. Based on the works of Shishkin written many poems.

The canvas is stored in the National Art Museum of the Republic of Belarus. Minsk.