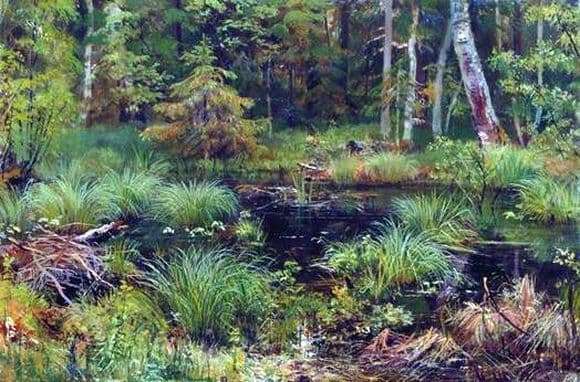 Ivan Shishkin – one of the most famous Russian artists. He painted, made prints, was fond of sketches. Especially he managed landscapes. Even in childhood, the boy showed talent with amazing accuracy to depict nature.

Later Shishkin entered the gymnasium, but, after studying for several years, he quit. Then he decided to study at the Moscow School of Painting, Sculpture and Architecture. It was this institution that he ended up with great success.

It should be noted that the artist did not just vividly portray the nature of Russia. He was a true botanist. Every blade of grass, every flower he drew with skill. The trees and shrubs in his paintings changed their appearance depending on the type of soil. The image of brushwood, deadwood, swamps and swamps was extremely realistic on the canvases.

In 1892, Ivan Shishkin completed work on the painting “Spring”, depicting a source in a mixed forest. The final size of the picture was thirty-eight to fifty-six centimeters. The work was inspired by gloomy events – the artist’s wife suddenly died. In an attempt to hide from grief, Shishkin decides to start a new work.

The picture reflects the sunny summer time. Daytime stuffiness is gradually replaced by a fresh evening. The composition is built immaculately. In the foreground is a pile of dead wood, behind is spruce. To the right are two birch trees, drawn with great love. The landscape is great for a break from the dirt and bustle.