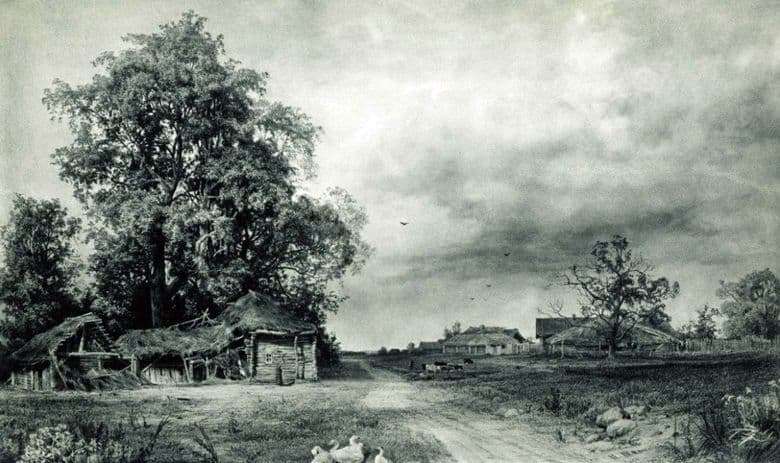 Ivan Ivanovich Shishkin occupies one of the most honorable places in Russian painting. He painted only landscapes, occasionally diluting them with animals and birds; the artist’s characteristic, detailed style is remembered immediately and it is no longer possible to forget it. While studying at the Academy of Arts, Ivan devoted a large place to drawing from life, considering this to be a particularly important point in the work of the master of painting. The first trips to the environs of St. Petersburg and Valaam shaped the style of the creator. In contrast to the majority of Russian artists, who willingly traveled abroad a lot, he worked mainly in Russia, in the vicinity of St. Petersburg. His only trip abroad (to Germany) was interrupted on his own before the expiration, as he missed his native places.

Shishkin was considered the most powerful Russian landscape painter in his lifetime. In all his paintings, he shows

an amazing knowledge of the plant world, accurately reproducing the smallest distinctive details of various trees, bushes and grasses. His canvases amaze with perfect truthfulness of forms. Against the background of this thorough descriptiveness, it sometimes seems that the form is at the expense of color. Therefore, the monochrome, black and white works of the author, etchings and engravings are especially appreciated.

The work “Village” is written in pencil and whitewash on paper. The artist again turns to his favorite plot – to the pictures of Russian nature; but in this case, the presence of a person is clearly felt in the picture. Glorifying the vastness of his native land, using minimal graphic means, the creator perfectly conveys the height of the summer sky with soft cumulus clouds, and the fantasy of the rickety village buildings, and the mighty breaks of trees, and the density of roadside grass. In the foreground, white geese graze in the thickets of flowers; further along the bend of the road one can see a small herd of cows chewing low grass.

The house closest to the viewer, old but strong, with a tiny window, is surrounded by collapsing household outbuildings thatched with straw. The buildings on the right seem newer and more solid. Lush trees pull their branches toward the sky, streaked with bird wings. A long country road crossing the distance crosses long shadows, crooked in potholes and potholes. Despite the monochrome, the work perfectly conveys the feeling of Central Russian summer – the warmth poured in the air, the rustling of the leaves, the smell of the earth heated in a day.