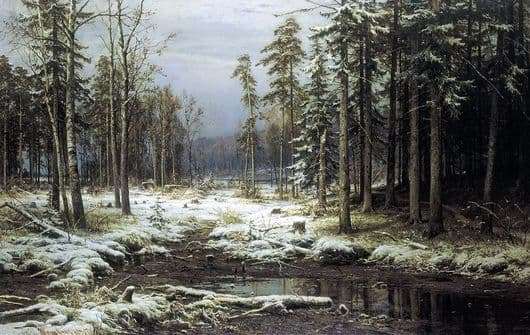 Among the large number of various works of Shishkin, there is one not inherent to his style of writing. This is the “First Snow”. The picture was painted in 1875. Looking at the product, we see the dampness and slush, suggestive sadness. Despair and longing for warm summer days are coming from the canvas. Melting snow forms slush, feet as if drowned in mud, and I want to find myself under a warm blanket. Nature is alarmed by the arrival of winter, even the forest looks chilled by such weather.

Shishkin managed to very realistic show the mood of nature in the late autumn. The author’s favorite topic is the forest. In the film “The First Snow” one can see the lyrical state, which is not typical for the author’s work. Past this picture are not critics and art lovers. It causes a feeling of sadness, dampness and loneliness. Shishkin rather accurately depicted the gray sky, heavy melting snow. On the canvas reigns natural, there is not anything superfluous and fictional.

Shishkin believed that practice is of great importance in the creative process and only with its help one can understand what you depict and see all the beauty of the moment. Therefore, it is necessary to carefully study nature. The landscapes should not be present fantasy author.

To date, the painting “The First Snow” is protected by the Kiev State Museum of Russian Art. Shishkin created in his paintings not just a forest, but showed his power and strength. For contemporaries, thanks to his love for nature, Shishkin himself became a symbol personifying the beauty of the Russian forest and the mighty power of the people. He was called the king of the forest, a forester, compared with a strong old pine. From the works of Shishkin, other painters learn to paint, even many children know his works. It remains to hope that this work of art will finally be appreciated.