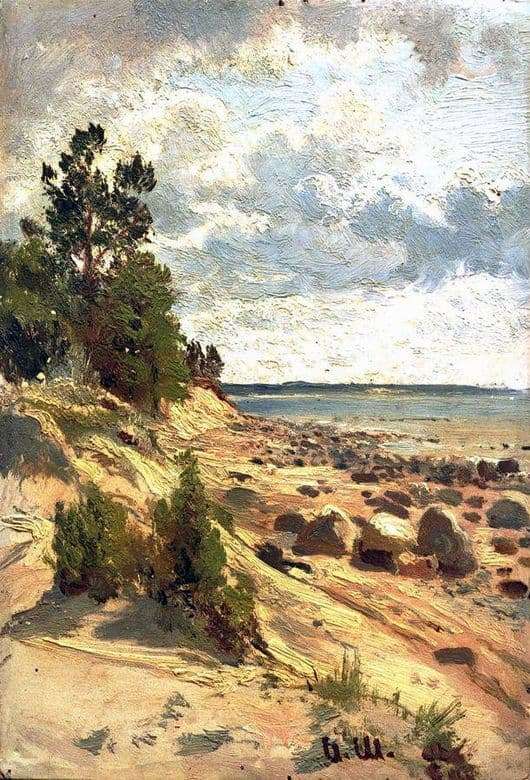 In Shishkin’s later works, as well as in this version, the master achieves an ever deeper softness of transmitting not only the emotional state, but also the image itself, as the integrity of the picture of its forms. As seen on this canvas, the master creates more and more softness along with various gradations of tone and more and more colorful picturesqueness. One of the best works, by right is the “Sea Coast”.

Despite the fact that according to historical information it is known that this landscape is a landscape of the northern edge, the master was able to perform the work very warmly. Despite the absolutely deserted beach, which casts some loneliness and to some extent sadness. The master focuses attention on the sea surface, which goes into the distance. One can observe how all these are being watched by bare branches, as if approvingly shaking their heads from gusts of wind.

Due to the fact that the artist uses an excellent contrast of white and black colors, a unique free stroke is created, which, apparently, the artist subsequently shaded, making it seem to the viewer that the sand is moving all the same gusts of wind. Thanks to such a masterful transfer of the naturalness and vitality of the imprinted landscape, the whole picture acquires an internal dynamic, colored by the emotional state of the artist.

The special spectacle of the picture is achieved thanks to the condensed clouds, which, huddling together in dense steeps, form a dense scarf, which envelops a piece of sky visible in the picture. Everything adds up to a certain excitement of nature, ready to explode at any moment. Toli it will be a sharp gust of wind, which by its strength will tear the leaves from the trees. Maybe heavy rain, which instantly turns everything around in a uniform wet picture, which will be poorly visible because of the dense wall of rain.