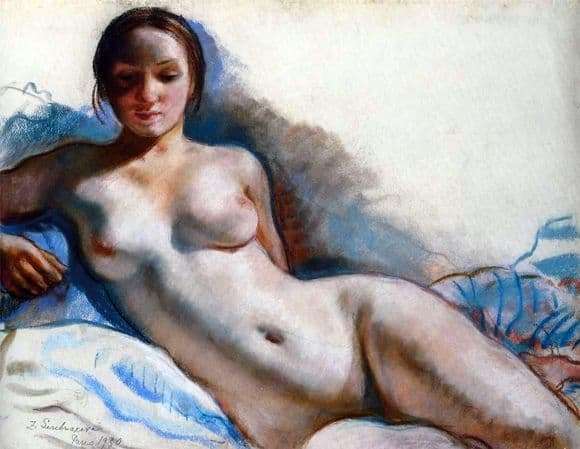 Creativity Zinaida Serebryakova from an early age was associated with the image of the body. For this, she did not study in a medical institution – knowledge of the nude display rules was in her blood. First, the artist began to depict the male body, but quickly moved on to the female.

In the early 1920s, the nude theme became ubiquitous in the work of many artists, and Serebryakova’s nude began to be widely appreciated in Paris and at European exhibitions. Serebryakova mostly wrote etudes. This also applies to the painting “Nude”, which the artist dated 1930.

A distinctive feature of Zinaida Serebryakova is that she depicts her naked models without much beauty of the body. She believes that the careful display of kinks and bends of the body is not characteristic of her work. This can be understood if we compare the work of the artist with the “bathers” of Kustodiev or the ancient heroines.

In the painting “Nude” the Russian girl is presented to the viewer, who elegantly lays on the sheets. Her pose is a symbol of freedom, as in the paintings of Titian and Velázquez, who portrayed Venus. The nobility of the model’s pose is striking: the artist invites the viewer to admire the harmony and plasticity of the girl’s form. Despite the fact that the girl’s gaze is directed downwards, she is not shy about her naked body. In this picture, Zinaida Serebryakova follows her manner of displaying the female body: it deprives the image of detailed drawings of the curves of the body.

The picture is made with strokes and in light-air, delicate tones that symbolize femininity.