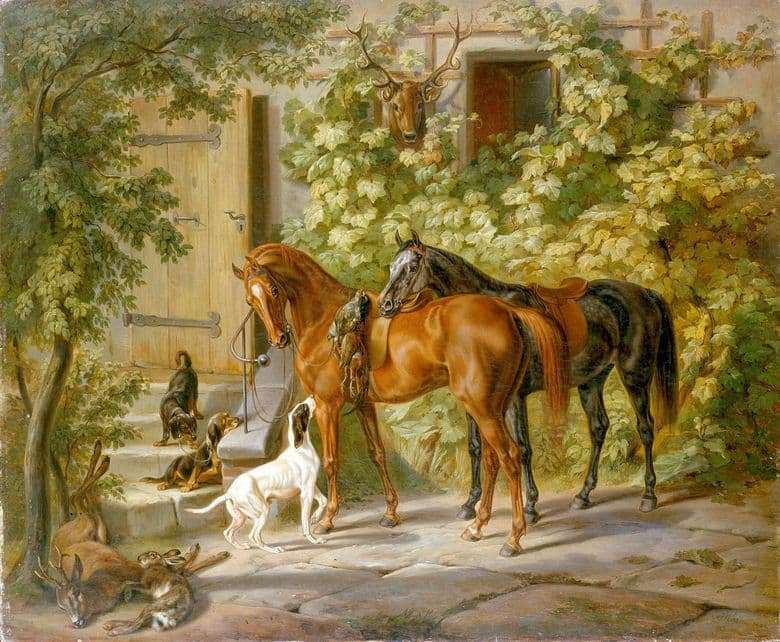 The German battle painter Adam Albrecht was originally known for accompanying Napoleon’s march to Moscow. The events that took place in Russia made a painful impression on the artist, on his return to Munich in 1815, he decided to leave the battle painting and transferred to a calmer landscape with animals. Of particular popularity in the works of Albrecht got horses.

After the first successfully sold work, he begins to receive offers from royal houses and court nobles to sketch their pets, mostly they were Arabian horses. One of such orders was “Horses at the Porch”, which brought their artist immense popularity in this direction.

Before the advent and beginning of active use of automobiles, horses were in great demand among all segments of the population, but it was notable persons who were especially thrilled about them. For them, it was not just a way to travel, the horses were given names, they were almost considered full members of the family, and the acquisition of a thoroughbred horse gave a certain status and spoke about the wealth of the owner, so they were enchanted with the pictures.

In this work, the artist immortalized two horses of pure Arabian breed at the porch of a hunting lodge. In those days, races and foxes were popularly hunted, and in the picture we see three tired hunting dogs and horses, which are still untouched by the butchering, waiting for their time. Albrecht in this picture skillfully combines elements of a hunting still life and an ordinary landscape.