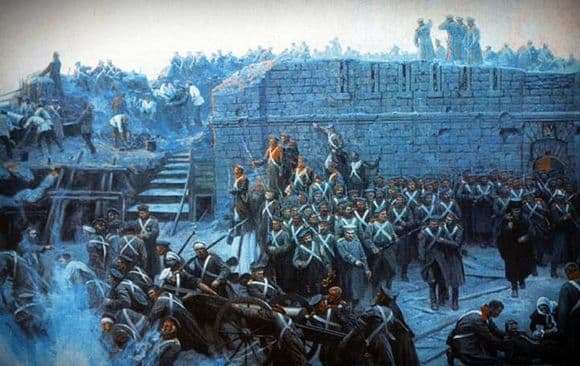 Separately, I want to talk about the history of the panorama of the “Defense of Sevastopol”, which is in fact no less dramatic than the history of this war itself, where the army of the Russian empire lost even in spite of unquestioned heroism and dedication of the soldiers.

In 1899, on the eve of the 50th anniversary of the war in Crimea, it was decided not only to make a parade and other events in Sevastopol, but also to create a gift for the anniversary, which will be dedicated to the battles for this city.

Franz Alekseevich Rubo in 1901, received an order to write this canvas. As soon as he received this order, he immediately went to Sevastopol itself in order to personally personally get acquainted with the documents, facts and portraits of that battle. Before starting to write a panorama, he made about 50 etudes.

The canvas depicts the plot of the battle on Malakhov Kurgan, where about 173 thousand British and French soldiers could not make a general breakthrough in confronting 75 thousand Russian soldiers. After the work was completed in Sevastopol, then it was necessary to wait for approval in St. Petersburg, and then Roubaud went to Munich, where, together with a large number of assistants, we completed the panorama. The amount of work was simply enormous and the size of the panorama too.

Panorama very clearly absorbed all the events of the battle. It is worth noting that only carefully traced people on the canvas of about 4,000 thousand, around which the battle broke out.

Speaking of the dramatic history of this canvas, the Great Patriotic War was meant, during which the Germans destroyed a large part of the picture, as a result, only insignificant parts and formats of the picture reached, which they have been trying to restore for several years, who could cope with the complete restoration of the panorama.