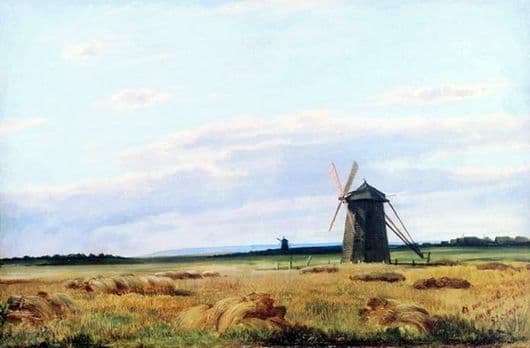 A surprisingly thin picture, the canvas of Shishkin himself, who much later will write “Bears in a Pine Forest”, “Rye”, “Dubrava” and many other quite famous canvases. This canvas is among the first. And it is easy to understand, at least by the way the lower landscape is softly drawn: the mown hay and sheaves of it around the mill. Must be said separately about the mills. Please note that we can see two mills at once – the one that is in the near plan, and further in the depths of the landscape, – but the impression is made that they are parallel to each other, at an equal distance.

Moreover, they are set in such a way that the wings would catch the “wind rose” and, if necessary, would begin to spin without much difficulty. But the peasants are the same on the tricks of the invention: in the Baltics they set up such mills that could spin on their axis, that is, catch the wind, where it blows harder. Such constructions of mills are in the famous mills of Spain. And in this landscape, the mills stand as if propped up by large beams. Most likely, the mill is already an old building and quite possibly could not withstand the pressure of the wind. That her and insure. After all, the mill for the villagers – the nurse. She prays for flour, the whole wheat harvest is carried to her like a bow.

But back to the canvas. Look around… Fields are sloping, which means that most likely it is already the end of summer, the beginning of autumn. And therefore, very soon the mills will earn in all their might, so that the flour will soon be ready, which then will go on sale or in the bins. But the sky plays an important role in this landscape. It is also autumn by the way, with clouds that do not bode well. But still the sky is a bit summer.

This blue remains, which is so pleasant to us in the summer. Yes, and the forest is still green and far away there are forest hills.

And what is interesting is, how many such landscapes are there on the subject of harvest, but there has never been such a canvas where the harvest would be bad. It is understandable, artists should inspire optimism in their works, but also make people think and reflect. Looking at this canvas, you think how good it is to live in your own side, where there are such magnificent open spaces.