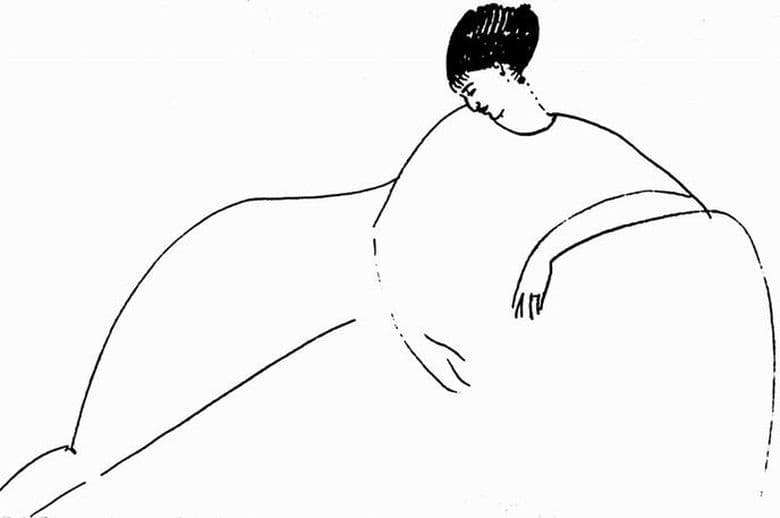 The picture has a size of 26.5 by 42.8 cm. Materials: black pencil and paper. Currently located in the memorial apartment of A. A. Akhmatova in the Fountain House, St. Petersburg, Russia.

The artist in his short life worked under the influence of several French schools, but in general he is considered a representative of expressionism and nude painting meter, which shows the beauty and attractiveness of a real, sensual female body. To such early paintings include this image of the great Russian poetess of the Silver Age.

For the first time, an unknown yet Modigliani and the recently released for Nikolai Gumilyov Akhmatova met in 1910 in a Parisian cafe and immediately felt a special connection. A year later, the lovers in absentia reunited for two incredible and hidden secret months that Anna Andreevna spent in Paris, despite her husband’s objections. Subsequently, this was the cause of the actual termination of her marriage. But the novice master painted sixteen portraits as a gift to his muse, for the most part of which she was completely without clothes. During the wars that followed these events, most of the creations were lost, but this, the most beloved poetess, returned to Russia in 2008. The legal owner is V. V. Putin, and until he decides to take the drawing, he is on display in the above-mentioned museum.

With only a few surprisingly clear and faithful lines, the author managed to convey a feminine silhouette, presumably in the form of an allegorical Night, royally reclining on a sarcophagus. In more detail traced recognizable profile and complex high hair. The original idea that was used is explained by the artist’s passion at that time in the mythology and art of ancient Egypt, which is extensively represented in the separate exposition hall of the Louvre. Sadly, contemporaries did not recognize the genius, and only after his death were awarded deserved fame.