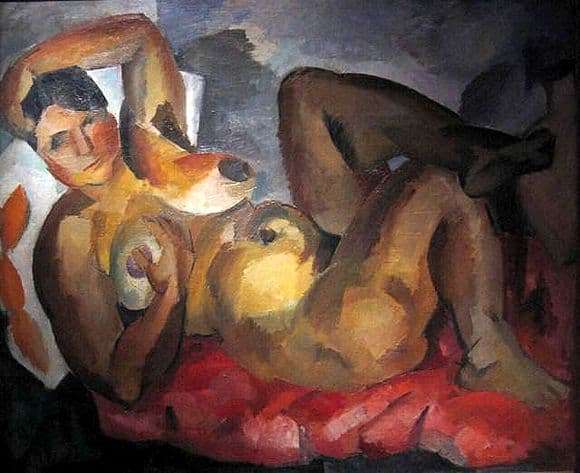 Falk Robert Rafailovich (1886-1958) is a famous avant-garde artist in Russia who worked at the beginning of the 20th century.

A painter of Jewish origin, who managed to create in his work a unique synthesis of avant-garde and Russian modernism, which was gaining popularity. Falk became famous not only for his paintings, whose artistic value is still increasing, but also for his active work in the world of art.

He was one of the founders and creators of the “Jack of Diamonds” association, whose participants set trends in Russian art of the early 20th century. For nearly six years, Falk dedicated himself to working in this community and, over the years of his life, has created many works that are now kept in major museums in Russia and the world.

The painting “Nude” was written by Robert Rafailovich in 1916, in the prime of his creative work. Her full name sounds like “Nude. Crimea. “, Which indicates the place of the painting. Materials are common – canvas and oil, with which Falk worked the most. But the picture is very atypical for the viewer.

The canvas depicts a completely nude woman, conveniently located on a red blanket and a white pillow. The body of the main character occupies most of the piece – lush, almost Rubensian forms, spelled with rich color.

The frankness with which Falk depicts a woman is combined with simplicity. No extra details are shown, only a beautiful dense body, on which the artist skillfully notes the light and shadow.

Local colors do not hurt the eyes, but necessarily catch the eye with its saturation. This work, the manner of his writing, can be compared with the famous Gogenov Tahitian, and it is not inferior to the famous foreign artist.