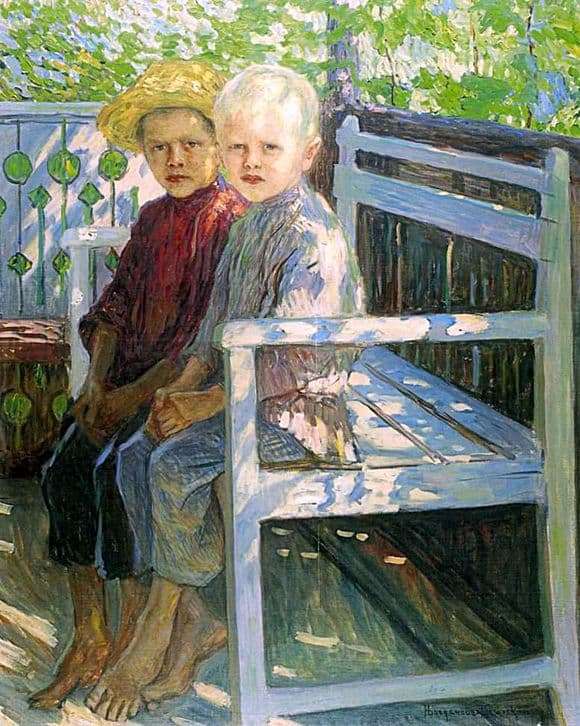 The painting was painted by the artist-academician of Russian painting Nikolai Petrovich Bogdanov-Belsky. His characteristic feature is the writing of a variety of canvases on peasant themes. Since he himself was born in a poor family, this atmosphere is well known to the artist. In each of his works, he tries to convey the full range of emotions, so that the viewer will believe in what he saw.

Nikolai Petrovich studied painting in various educational institutions, one of which was the icon painting workshop. He was one of the initiators of the Russian exhibitions in European capitals, where works by Korovin, Zhukovsky, Bilibin and other famous artists were presented. Bogdanov-Belsky was also very familiar with the Romanov family and even wrote a portrait of Maria Fedorovna on her own order.

The painting “Children” was written in 1910. It depicts two peasant boys, located on the bench. The artist wanted to emphasize the unity of Russia within the country, eliminating the division of society into classes. We are talking about the light hair color inherent in the Russian people, and the elements of clothing, such as shirts with rolled up sleeves, and the atmosphere of the canvas as a whole. The Creator remembers well his childhood, which he spent among peasant boys, which affects the realism of the image. In the view of children, the viewer can consider not only children’s motives, but also an understanding of their position in society.

In those days, peasant families from early childhood taught their children to work in the household. Hence the specific clothes of the little ones and their a bit tired, but still childish and kind eyes. The picture can rightly be called a kind of symbol of Russia of that time, looking at which the viewer is given the opportunity to find himself next to the boys from an ordinary Russian family.