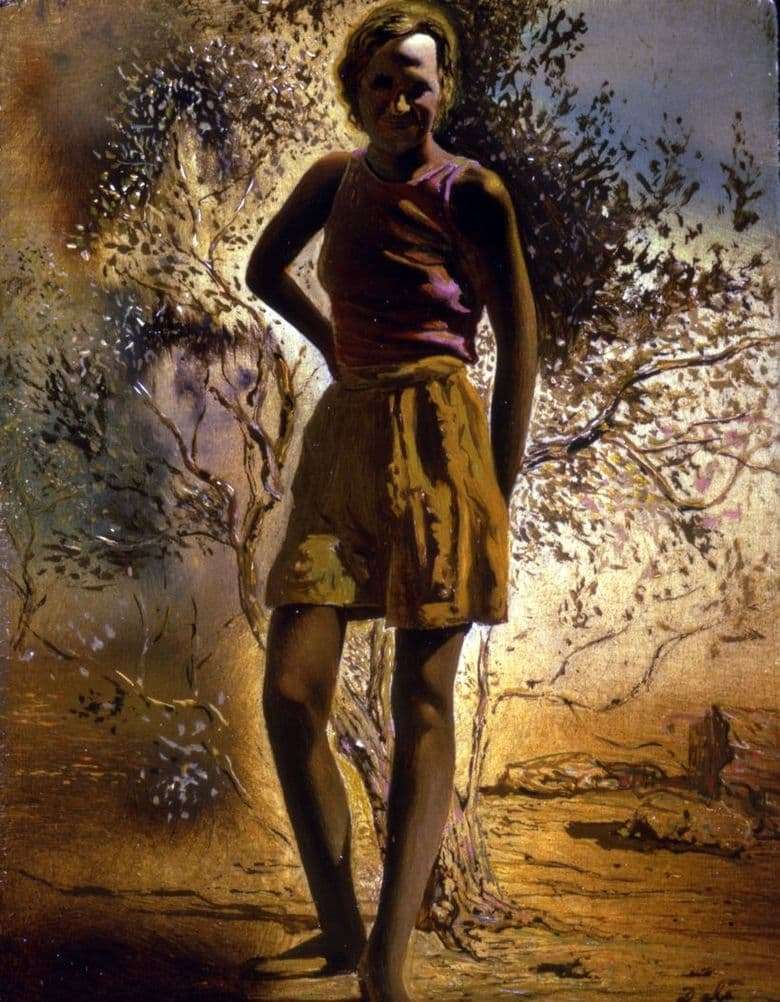 Gala was not just the wife of a famous artist. She was his model, muse and inspiration, her presence was felt throughout his work. The facial features or outlines of the muse’s body can be seen in almost every Dali painting, where there is a female image.

Salvador Dali often depicted his wife in the canvases. Most of the paintings were surrealistic, were written on religious or mystical subjects. Some canvases were realistic in nature, like “Portrait of Gala”, written in 1932.

The portrait of a woman is depicted in full growth. She is wearing comfortable summer clothes: T-shirt and wide shorts, opening long slender legs. In the background grows a low tree or a large spreading bush, through the branches of which the golden rays of the setting sun are seen.

Gala has a relaxed posture. One arm is bent and rests against the side, and the other is behind the back. The legs are arranged as if the image is captured in motion and Gala takes a step forward.

On the canvas, the main muse of Salvador Dali smiles. Her face radiates kindness and charm. At the same time, you can feel the powerful energy of this strong woman. According to their friends, Gala suppressed Salvador Dali, but at the same time inspired, directed and supported.

The eyes of the beloved Dali, depicted on the canvas, narrowed because of the bright scorching sun. The artist demonstrates the hot sunny weather with rich yellow and orange hues. This summer heat is associated with fire that inflamed in the heart of young Dali a Russian woman whom he had worshiped all his life. For Salvador Dali, she has always been the personification of love and tranquility. Thanks to Gal, the artist found himself, became a successful and famous person.