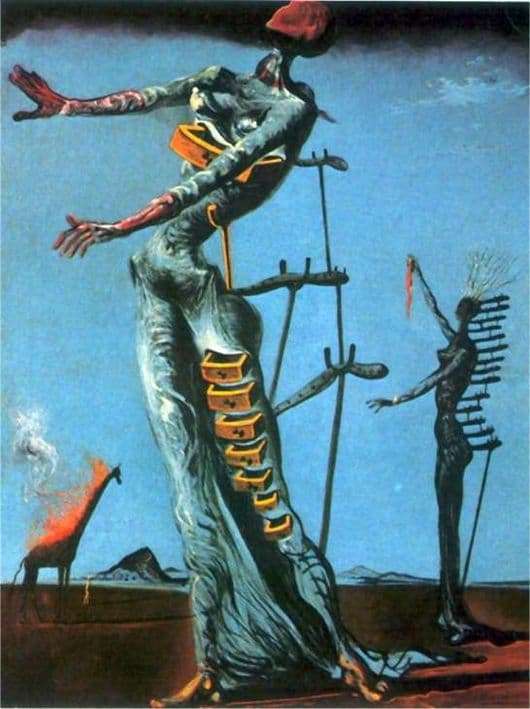 “Flaming giraffe” or “Giraffe on fire” – a painting by Salvador Dali in the late 30s is one of the most significant works of the great artist. This picture is written in a surrealistic style, and Dali’s other work, The Invention of Monsters, is directly related to this picture. These two paintings, in the opinion of the greatest artist, are a kind of warning about impending war. And indeed, in both paintings appears a giraffe with a burning back.

The tragedy of the work is emphasized by the bright contrast of the flame on a blue background. In addition, the extraordinary aquamarine color of the picture looks particularly impressive. In general, the combination of red and blue colors in the work play a special role, attracting attention and causing anxious feelings. In the foreground is a figure of a woman, with arms outstretched forward. The face of the woman and forearm, bloody, as if flayed from their skin. Her head, devoid of face, is filled with despair and helplessness in the face of impending danger. Behind this woman stands another figure, in whose hands hangs a piece of meat, symbolizing the death and self-destruction of humanity.

Behind each female figure are depicted the peculiar props that Salvador Dali often used in his works, thus demonstrating the weakness and depravity of a person. Despite the fact that the animal’s figure is made much smaller than the figures of women, the giraffe itself, the “male cosmic apocalyptic monster”, is the central image of the picture. In general, the great artist tried to convey this picture of a foreboding of the approaching war. Although some researchers and experts are inclined to the version,