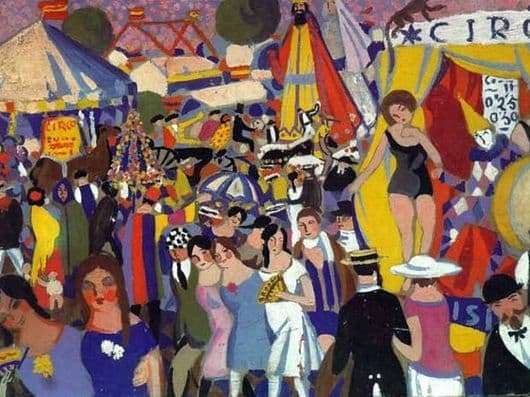 Salvador Dali is a rather ambiguous person, it is manifested with might and main in his life, and in almost all his paintings, the surrealist artist.

Many of his paintings are filled with some kind of secret, mystical, one can even say a few sacred meaning, which sometimes is beyond the power of even the most notorious art historians.

Our attention gets a picture of Dali, which is called the Circus. Quite an interesting picture, I want to identify some interesting nuances on it. If you look closely, this circus is like an exact copy of some kind of human society.

Here and all sorts of status and position of the beauty, with equally bright, apparently from the makeup cheeks. There are also those who are not captivated by the universal joy, because it’s just a screen, to smile when everyone does it, simply because it’s a circus. If we turn to the left edge of the picture, we will notice one person standing with her back to the whole action, as if watching me.

By the way, there is another interesting point, in the lower right corner, Salvador Dali painted himself, also looking from the picture directly at you, although it’s not entirely clear where to look. A large crowd of people, hype. So what did the author try to give us?

The hustle and bustle of a rampant day, or the ease with which people go to a circus, look at people and show themselves. Almost in the center of the picture, there are large images of the king and queen. Maybe this circus, this is such a mini-model of their society in those times, everyone is having fun and amusing their king.

No one thinks about tomorrow and spends their money, and only a few can turn their backs on all of this, and show their indifference, on the tricks of the royal family to “powder” brains to the common people. The picture is made mainly in three colors, so to speak in circus: red, yellow and blue.