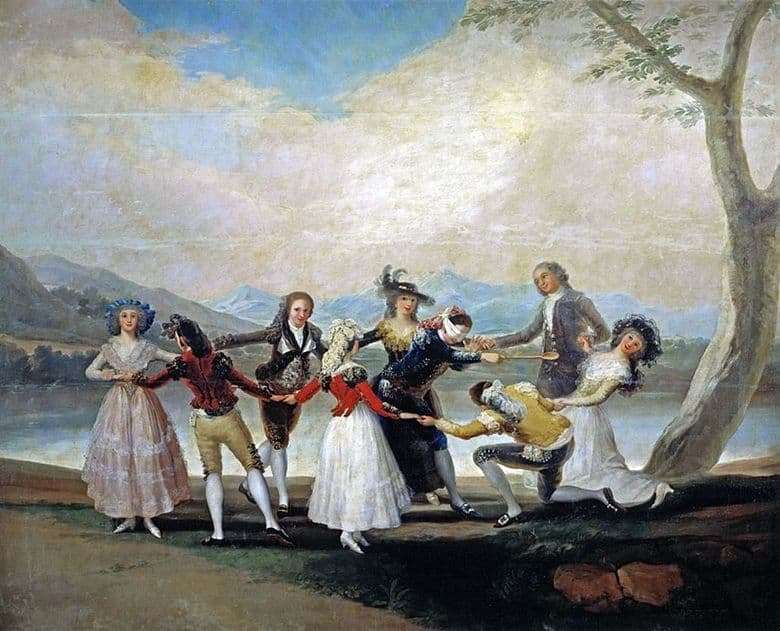 Cooperating with the Royal Tapestry Manufactory for a long time, the artist painted different plots on cardboard, which the weavers transferred onto woven tapestries. One of these cardboard paintings is the “Hilar’s Silence.” The picturesque scene of aristocratic entertainment captured on this canvas. In the central part of the picture several young men and women, holding hands, formed a circle. In the middle of the circle, a young aristocrat, with a blindfold, tries to touch a player who is trying to deviate so that the spoon does not touch them with a long wooden spoon. This game was very popular among the aristocracy in the days of Goya. Such fun was considered entertaining, fun, interesting.

People are very elegant and expensively dressed – these are nobles, the rich, as they said then, are high-born. Women in light, light dresses, young men are in expensive camisoles. The action takes place in the summer. Apparently, to hide from the scorching sun, from the heat, they chose a place in the shade of a tall olive tree, on the shore of a lake. The lake surface reflects the blue sky with white weightless clouds, the mountains that are visible in the distance. Mountains as if framed the mirror of the lake, directing their peaks to the blue sky, abutting their peaks in white, light, foamy clouds. Under a tree, behind the game participants, in the right corner of the picture lies a stone split in half. Its two halves look like butterfly wings and lie in dark thick grass, as if lurking, also hiding.

The players are cheerful, satisfied. They have no hurry – they enjoy each other, the game. They are smiling at each other. Nature is written out very clearly. Even small, delicate olive leaves to the smallest teeth on them stand out sharply against a white cloud. In the left part of the picture the dark low mountains turn into blue, higher ones. The lake valley is surrounded by all these mountains. An interesting detail: a series of white clouds as the border between the blue sky and the same blue mountains, located in the depths of the picture, in the background.