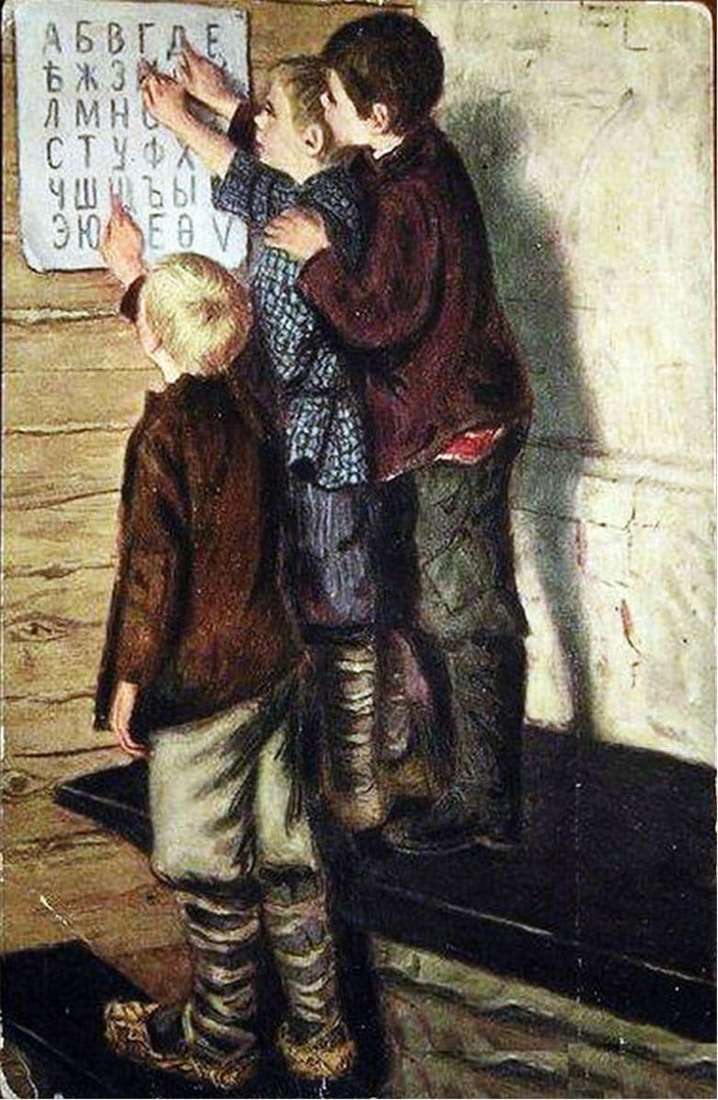 Painting by Nikolai Petrovich Bogdanov-Belsky “Novices” was made in 1904 in the style of realism.

The image of the school, peasant children occupies a special place in the artist’s work. This topic is devoted to the work “Novices”. At the heart of the plot – three boys who learn the alphabet. Two of them are dressed in typical peasant clothes. On the feet – sandals, tied to the knees. The third boy is in his boots. One would think that it is urban. However, a huge patch on his pants, a red corner of his shirt, which slipped out from under his jacket, indicate that he is no different from the other guys.

The boys stand on the benches installed along the walls, and are passionate about parsing the alphabet on the wall. Each child points to his letter. Considering the picture, the viewer, first of all, draws attention to the heads of the children. Two boys are turned in profile, the third is back. Despite the fact that the faces are not fully visible, the artist has managed to convey a deep interest and desire for knowledge. The guys are carefully looking at the alphabet, point to different letters. Complement the impression of posture and head tilt.

Image volume. This is achieved through the beautiful transmission of light and shadow – the shadow of a boy in boots lies on the wall. Black and white drawing is used in drawing clothes.

The color contrast, which found expression in the light walls and the black pavement of the bench, the dark hair of the boy in boots and the light heads of the other two guys, also underlines the volume of the image. It is interesting that the only bright spot is the corner of the shirt of the boy in boots, in shape repeating the knots on the wall. The artist uses it to pay special attention to the fact that events take place in an ordinary wooden hut.

Not only the figures of the guys are spelled out in detail. Wooden walls with knots, joints, stone benches with black boards painted on them, cracks on the wall – there is realism in everything that the author uses in all his works.

The work is filled with depth, kindness, love for children.