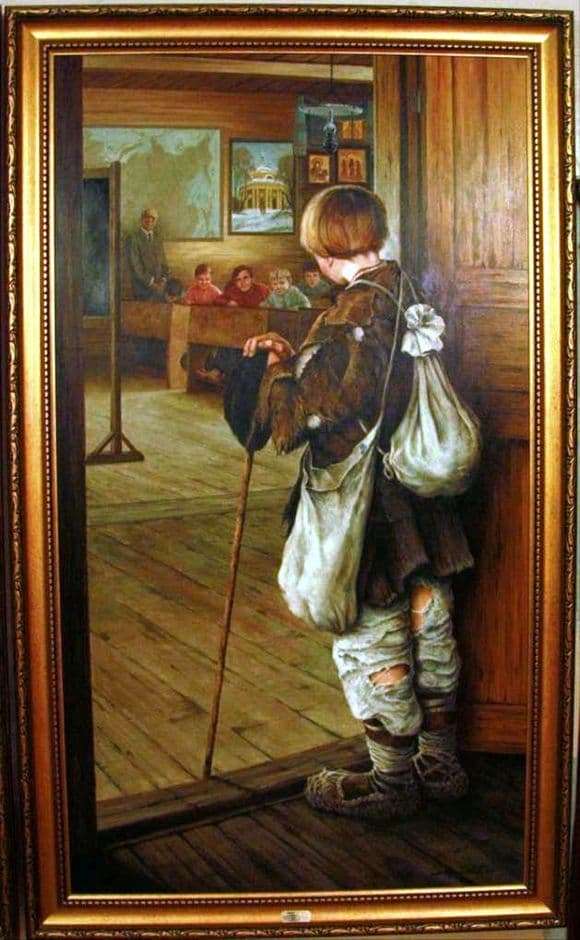 The autobiographical work of N. Bogdanov-Belsky, “At the Door of the School,” draws attention to the early period in the life of the itinerant artist. Like most artists depicting the specifics and character of peasant life, Bogdanov-Belsky knew firsthand about the popular environment.

He was born in the family of a poor peasant and received the basics of painting and drawing in the icon painting school. Then he studied in Moscow, St. Petersburg, Paris. Created a series of famous paintings about the school, where the main characters are village children.

Among his famous school subjects is the painting “At the door of the school.” The story is from the author himself. Perhaps the artist, being the son of a laborer, was once afraid of the impossibility of getting into school.

The fact that this is a school class say school items and accessories. The children are sitting at their desks, and a map is hanging on the wall, a blackboard is seen. The poor shaggy clothes of a boy standing in front of the door tell about his origin.

The head, apparently, was covered with a cap, but at the entrance to the temple of enlightenment, the boy took it off. The pose of the boy gives him an interest in knowledge, in the atmosphere of the school, but leaning on a stick and clutching a headdress, we see that he is worried, afraid to enter.

The spectator hopes that the character will enter the class and continue his journey to knowledge, as the artist managed to do, who in 1987 devoted the work to the Raczynski folk school.