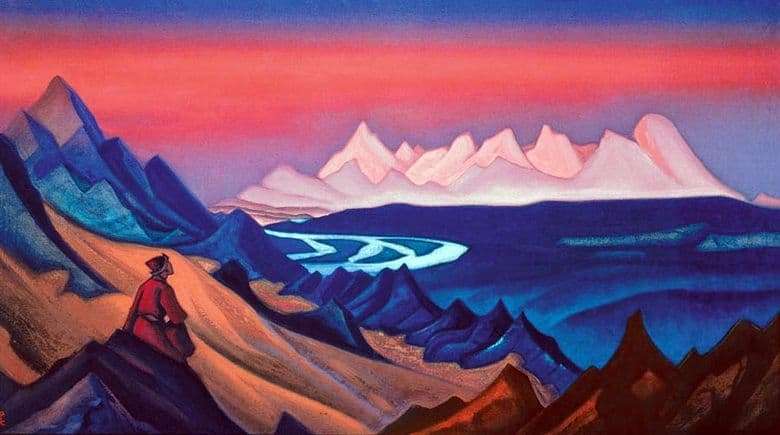 Before us is a picture of Nicholas Roerich, written in the late period of the artist’s work. The work is included in the collection of paintings dedicated to the Himalayas. Roerich personally observed these mountain landscapes during an expedition to the East.

The mountains depicted in the picture attract the eye. The variety of colors that Nicholas Roerich used is striking. All colors are slightly muted, but still they are bright and saturated, conveying the inner world of the artist. This riot of color is the song that played in the artist’s soul when he saw these mountains with his own eyes.

In the foreground is a mountain slope. It was already dark and the sunlight had ceased to illuminate this part of the ridge. Mountains are shown ocher, then bluish-black. Due to the constant refraction of the lines, it seems that the mountains cut through each other. They seem to merge, grow together, forming bizarre

And then the fog. He covers a modest plain, which is clearly out of the texture of the rocky mountains. The artist does not pay much attention to this valley. The main thing – snow-white mountains in front. They, like snow giants, grow in the depths of the picture. And around – a purple sunset, framing the dangerous, but such majestic rocks.

On the mountain, which is located closest to us, traced a human figure. This is a man or a young guy. He is wearing traditional red clothes and a hat. He sits alone on the top of a low mountain and sings. It was obviously very difficult for him to climb so high in the mountains. But he does not complain. His whole life is devoted to these mountains. But he does not serve the gods, he devoted his soul to the search for truth. His gaze is far away, far above the horizon. He glorifies the beauty of Shambhala. A man, like Roerich, wants to know the secret of a lost state.

Roerich together with his family spent many years in the mountains of India, China, Tibet, Mongolia. And he did not miss a single opportunity to paint a picture, praising the beauty of those mountain ranges.