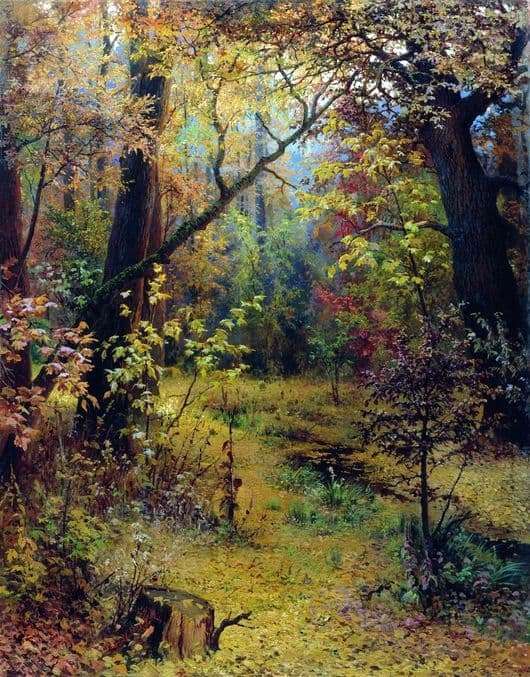 Grigory Myasoedov – was an active creative figure who played a significant role in the development of Russian art. His paintings were mainly addressed to the call for action. Strong character and will convey numerous works of the artist. He sought to learn everything about everything: he participated in revolutions, studied folk traditions and much more. Only at the end of his life, Myasoyedov retired and went to live in the village, where he would discover a new world for himself – nature. He begins to create domestic paintings, and most importantly – tries to create landscapes.

Myasoedov in the painting “Autumn Morning” could catch the moment when nature prepares for a long sleep in winter. From the very morning it starts moving: the leaves fall off, the flowers lose their former aroma and form. For many, autumn is a time of sadness, but the picture of dates is an opportunity to look at the magic of autumn from the other side.

The composition consists of bright colors that are softly blurred: orange, yellow, purple, brown and other colors. Such a variety of colors allows you to see all the beauty of nature in preparation for the completion of the year-round cycle. Vivacity and mobility gives and a trickle that flows in the depths of the forest. He is depicted as a narrow ribbon, but filled with life. The stream strives forward, while nature tries to hide it with its leaves, making it mysterious and imperceptible for the traveler. One can also notice the fog that has spread up above the treetops, creating a bluish-white cloud.

An unexpected accent becomes a stump, which looks harmoniously with the environment, giving completeness to the picture. For the rest of the trees, life goes on, but soon they will complete their lives. The whole picture is permeated by a bright yellow color, which symbolizes harmony. One time of year gives way to another, preparing the environment for change. Although the canvas and realistic, but it remains some kind of mystery and mystery. As if the forest does not want to tell their secrets to man.