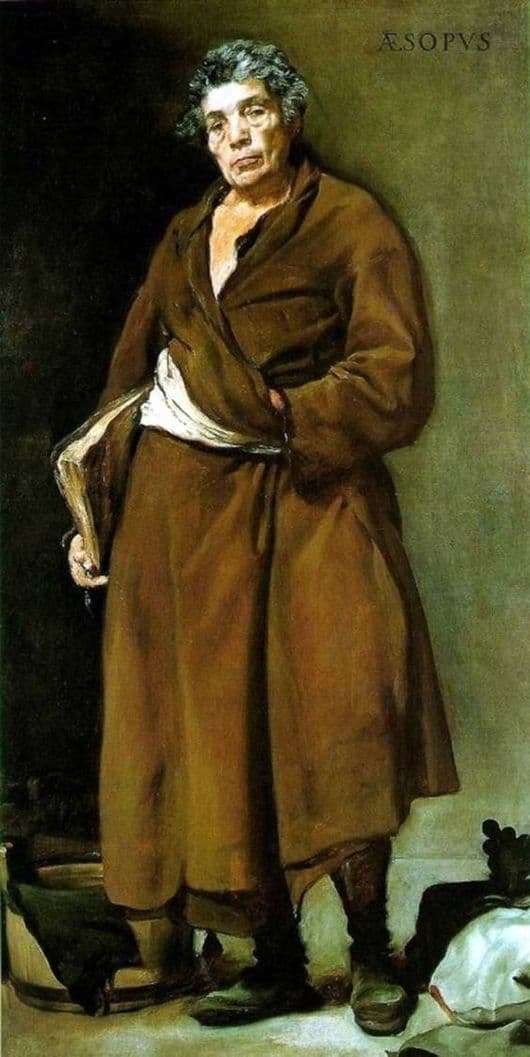 In the ancient Greek era, it was Aesop who was incredibly famous. The fables he created told people to each other. It was he who in the form of various animals embodied all sorts of human types. This is constant greed, incredible stupidity, great vanity and others. Many, listening to his fables of unusual sharpness, recognized themselves in them.

Aesop was a slave. When the owner was convinced in his mind, then let him go free.

On the appearance of Aesop folded many curious legends. He was usually depicted of short stature, necessarily hunchbacked, absolutely repulsive. But in fact, many writers specifically worked to create a similar appearance to Aesop, deliberately strengthening all those features that were unpleasant. This was done to highlight the inner beauty of a person against the background of his ugly appearance.

Velazquez depicts the legendary fabulist Aesop. His face is a little puffy, and his clothes are completely worn. We see a vagabond who used to be a slave. But everything changes, if you pay attention to the view of Aesop. He looks like a judge who graciously listens to excuses, or a doctor who scrutinizes the patient, and, perhaps, a teacher who is going to blame the student. Perhaps this is the way the god himself looks, who is observing mankind, who has constantly been naughty. The man who was at the bottom of society, has become almost at the height of God himself.

Velázquez was incredibly important to show special wisdom, which is separated from social status and his dignity. Such people are completely devoid of any gloss. They are far outside of society. But they need it precisely to maximize the understanding of this whole society.

On the one hand, Velasquez’s philosophers are completely deprived of life, but for this reason they have an incredibly deep knowledge of life.