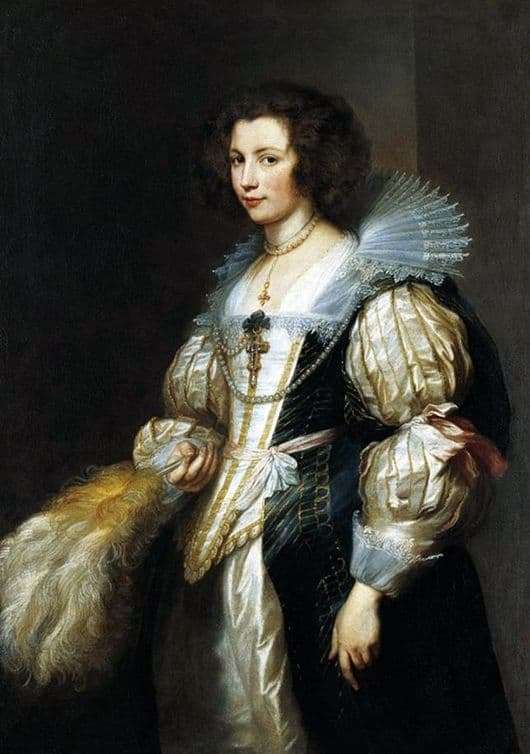 Van Dyke to write portraits, especially he loved to paint portraits only nobility, dignitaries. As for the portrait of Marie-Louise de Tassis, he is the pinnacle of perfection. At the moment, in all of Europe it is this woman’s portrait, the most famous and popular. Turning directly to the portrait itself, it is impossible not to appreciate the filigree with which the master prescribes the fine details of the costume, jewelry and other things.

Looking at the picture, it is clear that, despite the uniqueness and complexity of the portrait, the artist’s strokes are fairly free and dynamic, the painting remains free, even with wide writing. Thanks to such a complicated implementation, but simple by the idea of the technique, the artist manages to convey precisely the inner world, the emotional state, the experiences of the portrait. It can be seen that the canvas is full of life, and just shines from the riot of colors.

Despite the simple posture of Marie-Louise, in all her gaze visible imposingly, and her noble roots, which allow her to look a little higher, all the rest. Apparently, the portrait was painted from life, for which the artist perfectly conveys the play of color and shadow. I especially want to mention the writing of the pen and some elements of clothing, which are literally photographed, because even the smallest nuances and details can be considered.

Thanks to this writing, the portrait looks particularly lively, and it is not surprising that the artist received regular orders for writing portraits of people from high society. Despite the chic clothes portrayed, she did not bore herself with exquisite jewelry, two crosses and a bead are enough. After all, this genus is already quite famous, so there is no need for an additional accent, it is not known whether the master or the one who is being portrayed decided so.