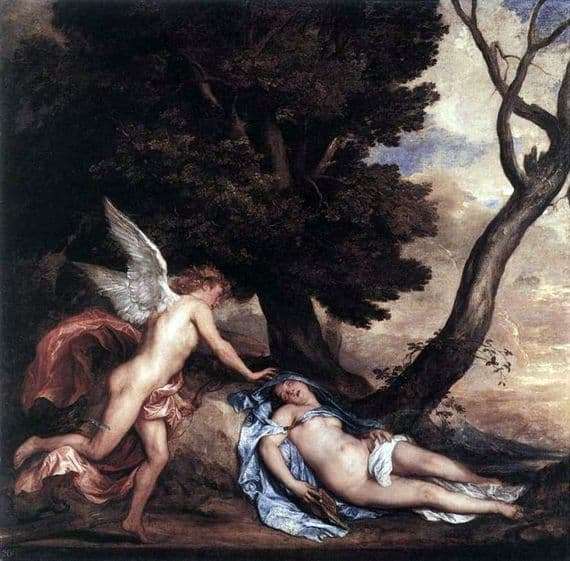 A fairly well-known mythological story about the union of Amur (or the god of love Cupid) and the mortal girl Psyche, who later was granted the immortality of the gods. Proceeding from giving, the girl’s parents asked Amur to marry her, but he was fascinated by her beautiful beauty and decided to marry her himself.

Taking her to the fabulous beautiful castle, he visited her only at night, in total darkness, so as not to show his face and true origin. However, the envious sisters all the time pushed her by any means to look at her spouse and make sure that he was a fair-haired blond young man, and a terrible monster cursed in the form of a terrible snake.

The girl gave in to persuasion and with a trick she saw the face of her beloved husband, but Cupid was upset by the incident and left her spouse to grieve alone in the castle. Psyche very long sought a way to apologize to her husband, until she met the goddess Venus. Venus did not want to continue this union between God and woman, and therefore decided to kill Psyche by deception.

In his composition, Van Dyke decided to portray the moment where Psyche, after a long separation, meets his beloved Cupid. Cupid is depicted as a naked blond youth, with a beautiful body of the god Olympus. Snow-white angel wings grow from his back.

Cupid flies to his beloved, touching her beautiful face with his hands. Psyche is depicted in a long dream, and next to the unfolded gift of Venus. Their robes of red and blue are symbolically used by the author to distinguish between masculine and feminine. They are the brightest elements of the picture, while the background is very monotonous.

Dark trees, which are not particularly detailed, are made in golden brown tones, which are in good harmony with the colors of the earth of stones and clouds, without paying too much attention to themselves.