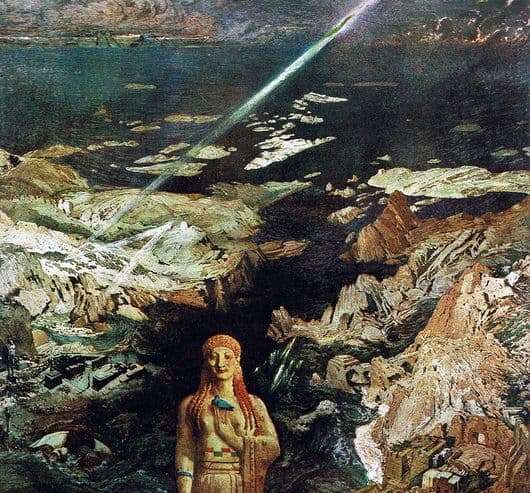 The artist collected the picture in parts for several long years, fixing every moment of his stay in Greece and acquaintance with the era of Antiquity. Because on the canvas, defying the spatial and temporal framework, coexist and monuments dating back to the ancient Aegean culture of the XIII century BC. e., and architectural ensembles already Classical Greece.

The compositional center of the canvas is the statue of the stone Aphrodite with a dove in her hands, whose motionless smile comes into contrast with the depiction of the death of civilization in the background. The viewer is watching this, being as if on some kind of elevation, while Aphrodite is closest to him.

By “ancient horror” pagans understood the nightmare of human existence, which is always ruled by incomprehensible Rock. According to Vyacheslav Ivanov, the application of the divine image was to demonstrate that nothing, including honored idols, could resist the chaos of existence in the mind of a heathen. Only Fate (or Chaos) can live forever. Possible interpretation of the picture and in a more historically specific context.

Since the concept of the work was born during the Russian revolution, it can be assumed that the use of the image of Chaos helped illustrate the inevitability of the death of all old life in anticipation of the dramatic changes that people of the early twentieth century faced. There is also a third interpretation, according to which Aphrodite symbolizes the eternity of art and its universal essence.

In 1909, the picture was shown at an exhibition in Paris, and a year later she won the gold medal in Brussels. The “ancient horror” was destined to become a landmark in many respects works of art – first of all, for Bakst himself, who, despite the desire to write such a painting again, almost never returned to painting and created only theatrical scenery. In addition, the picture exposed another way of the development of art of the 1910s – neo-classicism, the subsequent popularity of which allowed him to jokingly be called the chronic “disease” of culture.