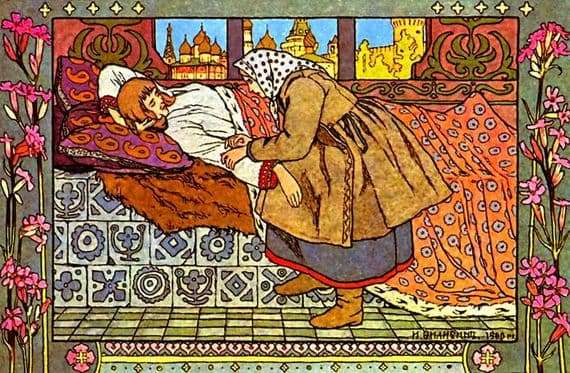 Bilibin was an ordinary artist – he grew up in Petersburg, he listened to fairy tales in early childhood and vaguely remembered.

But one day he came to the exhibition, where he saw Vasnetsov’s painting “Warriors”, and his life changed drastically. He was so impressed with the work of his colleague and her theme that he left social life, and with it city balls, gossip and duels, went to a deaf village in the Tver province, where he spent some time listening to old people, wandering through the woods, and getting more and more penetrating the spirit of Russian folk tales.

At the same time, the idea of illustrations that would make collections of folk tales more interesting and colorful began to appear in his head. Returning to St. Petersburg, he did not leave this project, and soon a collection of tales of Afanasyev with his illustrations was published.

“Feather of Finista Jasna-Sokol” is a tale old and tell it everywhere a little differently. But, in general, the main milestones of the plot remain unchanged – a merchant with three daughters, the youngest, asking for an unprecedented gift from him, a tiny feather that lies on the floor of the face and calls the handsome Tsarevich Finista Jasna-Sokol, who is ready to talk all night long.

And after that – the envy of the older sisters, a window wounded by knives and shards of glass, a wounded falcon and three iron breads, three iron staffs, three pairs of iron shoes and a lot of roads to go through.

The illustration also shows the moment when Finist sleeping in a sleepy potion sleeps without responding to attempts to wake him up, and the merchant’s youngest daughter stands above him sprawled on rich pillows. She is dressed simply, her head is tied with a scarf. She squeezes the hand of her prince and her face reflects expectation, confusion, hope and agony.

The little fairytale moment is caught very precisely, and folk patterns, intricate flowers, and subtle ornaments hover around it. All this immerses into the atmosphere of a fairy tale, but at the same time the characters show emotions, they are alive. Their faces are not like frozen masks, as often happens in illustrations of fairy tales.