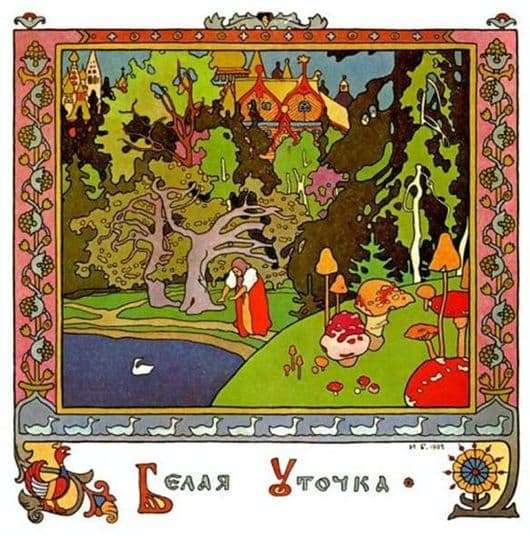 The illustration of the “White Duck”, exactly like six more fairy tales, is significant in that Bilibin was able to develop and actively introduce into his work a special drawing technique – ink, colored with watercolor.

Bilibin was a supporter of the use of Russian ornament in the design of his works. In this regard, he often visited the Russian hinterland, where he noticed the peculiarities of local folklore, the identity of the villagers.

The illustrator draws many fairy tales. In this work, he found himself, and he has no equal. Bilibin surprisingly intertwined modernity with ancient motifs in its design plots, which markedly distinguishes it from its contemporaries. 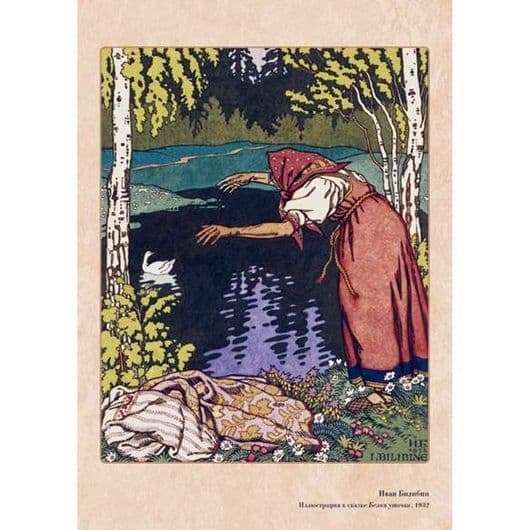 Simple colorful motifs of fairy tales are inimitable. The details of the “White duck” are spelled out with such love that they are understandable not only to children, but also to numerous critics and art historians. Thanks in large part to Bilibin, interest in ancient Rus is still maintained.

One day, the artist will write that old Russia is open to people again, as America once did, and despite the dust of oblivion on it, the love for it is growing, and the interest does not fade.

In addition to images, the artist is actively in the design uses a Slavic ligature, which he owns perfectly. In addition, Bilibin studies fonts of various epochs, especially the Old Russian semi-joint.

Bilibin had a wonderful artistic experience in Munich, where he was an apprentice of the famous Ashbe. Returning to Russia, he enters the workshop under the direction of Repin himself. After the workshop was the Highest Art Academy, which Bilibin easily finished.

Having lived the bulk of life in St. Petersburg, he died, unable to bear the blockade in 1942. Bilibin was buried in a mass grave together with other professors of the Academy of Arts.