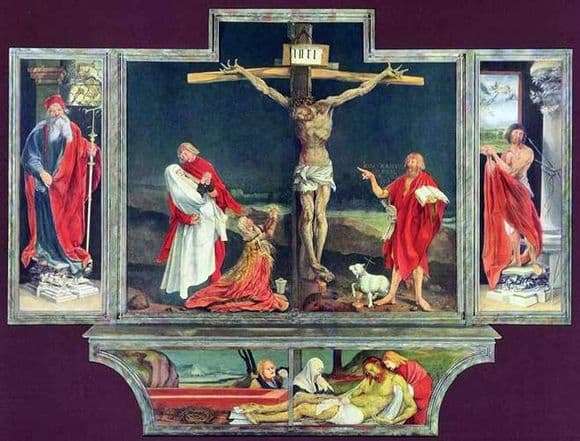 Matthias Grunewald, a German by birth, the last representative of the northern Gothic in painting, who created several masterpieces in his short life (perhaps there were many more paintings, but very few of them have survived to this day), Igenheim Altar was considered to be his main work.

The work was ordered by monks from the poorest order, whose main activity was the healing of sick people. This masterpiece was written, presumably at the beginning of the 16th century.

In the very center of the composition we see the crucified Jesus Christ, through whose body the blood flows. In Christ himself, there are no deviations from the canons, in principle, except, perhaps, for the hands, with fingers so widely spread that it is impossible not to be terrified by the torments and torments of the Lord.

In addition to Jesus, in the center is depicted the Mother of Christ in a white robe, falling unconscious from the suffering of her son. She is supported by the beloved Apostle of Christ John, who pours out all the sorrow on the Mother of God (only he does not look at the crucified). Also, Mary Magdalene is praying on her knees, raising her hands. On the other side of Jesus stands John the Baptist.

At the time of the murder of Christ, John was already beheaded, but in the picture he is depicted alive. Thus, the artist shows that John is still the forerunner of Christ, the shepherd, who led the sheep people to faith (as evidenced by the lamb standing next to the Baptist holding a small cross).

The same characters, with the exception of John the Baptist, are depicted on the lower casement, showing the mourning of the beloved Lord and putting him in a coffin.

On the sides of the central scene, we see the saints Anthony and Sebastian. The first was the patron of the Order, who ordered the altar to Grünewald. The second was the patron saint of doctors, and since the monks were engaged in healing, Saint Sebastian was their patron.

Anthony stands in red and blue robes, holds a staff that testifies to power, and looks out into the distance, paying no attention to the imp near the window, trying to tempt the saint.

Sebastian, a former martyr for the faith, among other mockery, was ruthlessly pierced with arrows. Pierced it is depicted on this masterpiece.