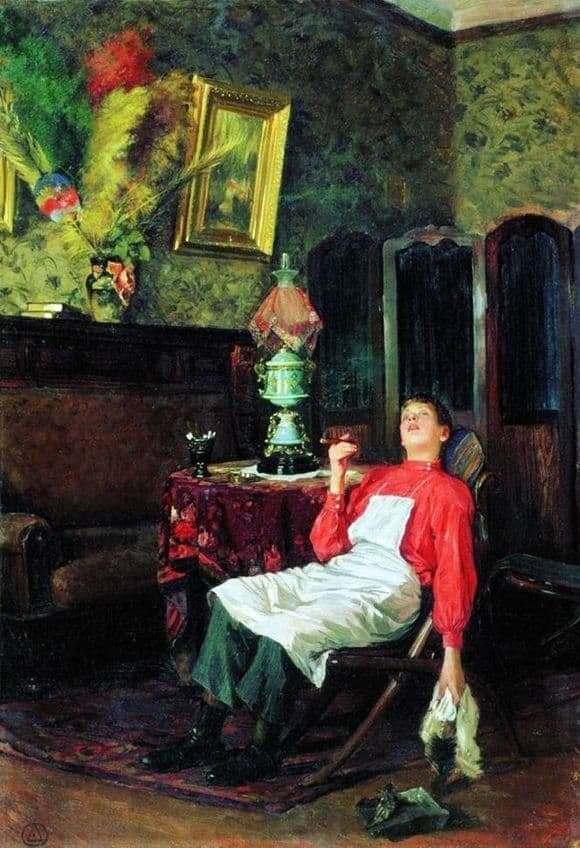 Looking at the next work of the Russian artist Makovsky, a kind smile appears on his face. “Without a master” – the name of this picture, which briefly and in the best way conveys content.

Painted canvas painter in 1911. It belongs in its style to genre painting. VE Makovsky again showed himself as a master of describing different characters and as a person with a wonderful sense of humor.

We see one human figure in the image. This kid, maybe even a kid. In appearance he is no more than thirteen. The boy is obviously trying to imitate the owner of the room.

Taking advantage of the lack of people in the house, he leaves the cleaning that weary of him and indulges in idleness. Having relaxed in the chair, the boy smokes a big cigar taken from the master’s table. The look is noticeably detached, he wanders in unknown dreams.

What is the boy dreaming about? Seeing that at such a small

age he has to work not at a better job, one can make a conclusion about the poor condition of the child’s family.

Forced to work out his life from childhood, he still remains a mischievous little boy, far from serious adulthood and responsibility. Imitation of the owner – a manifestation of children’s games, fun fun. Who knows, maybe in the future he really will have such a house and his own servant.

Makovsky wonderfully described the interior. The motley carpet on the dance floor echoes the colorful tablecloth. It has a lamp in the lampshade, an ashtray. Dark, high-quality furniture flaunts on the background of emerald-colored wallpaper.

The picture in a wide gold frame speaks about the viability of its owners. There is a vase on the piano, and in it there are huge colorful feathers of wonderful exotic birds. Inappropriate and comical with all the magnificence of the interior looks like a scoop thrown by a teenager on the floor and a dust cloth, clamped in his left hand.