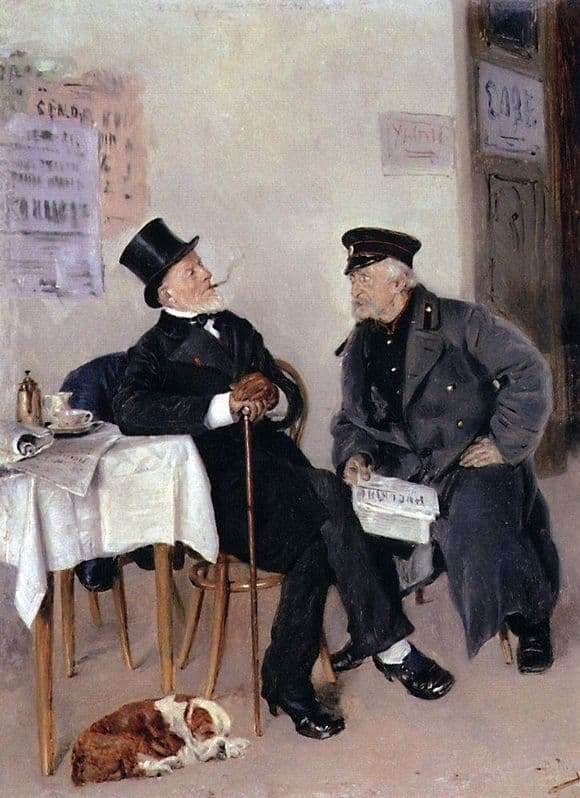 Makovsky was a true master of everyday paintings. Each scene he depicted with humor, but at the same time all the works of the artist imbued with deep meaning.

We see two men sitting and talking about something. More precisely, they do not even just talk, but argue. On one person enough nifty outfit, which is complemented by a top hat. In the hands of his cane. His opponent is in a gray overcoat. In his hands the newspaper. The topic of the dispute becomes clear from the very beginning. Most likely, they have read a political article and are now discussing it with enthusiasm.

For Makovsky important all the details. It is no coincidence that he with such skill depicts a table with a white cloth, on which lies a newspaper and a cup. Under the table, comfortably settled white-red dog. The artist depicted it in order to revive the composition. This is a peculiar listener of the heated debate that flared up between two gray-haired people.

The viewer can assume that these heroes canvases Makovsky absolutely no matter what to argue. For them, the process itself is important. Their poses and faces express incredible vitality. Before us are representatives of the two classes of the time. The whole point of their life is to constantly prove their rightness. Do I need to do this? This is another question. They enjoy the hottest conversation. Most likely, the truth in this dispute will not be born. Everyone will remain unconvinced.

Makovsky skillfully uses a palette of colors. The picture is dominated by brown and gray tones. A bright spot is a tablecloth and newspaper. The background here also matters. On the gray wall hangs all the same newspaper. On the right you can see the half-open door leading to the next room. Perhaps the heroes are waiting for them to be received by a high-ranking boss.

Makovsky depicted a familiar everyday scene, but he was able to convey his own attitude to what was happening. He looks at the heroes with some irony and at the same time reflects on his modern life.